Why did you choose to study at WPI?

“As the lead programmer for my FIRST Robotics team in high school, I was familiar with WPI because it operated the software library used in FIRST. But ultimately, I decided to attend WPI because it offered a chance to integrate myself into a community explicitly focused on STEM from a project-based approach. This allowed me to truly become engaged in my studies, rather than simply completing trivial tasks from a textbook.”

How are you involved with the WPI community?

“I am a member of Upsilon Pi Epsilon, the Computer Science Honor Society. I chose to be a member of this because most of my friends were not computer science majors and it gave me another community I could relate more directly to for the work I was doing. We all had taken a lot of the same classes, had the same professors, and had a lot of shared common ground. I was also on a flag football team but, unfortunately, I no longer participate since suffering from a concussion. This was a great outlet for me because it gave me a chance to clear my head and do something active rather than sitting behind a computer screen. Lastly, I am a part of DDMS, the Data-Driven Material Science Research Lab on campus, led by Professor Cote and Professor Neamtu. This has enabled me to pursue research, publish work, attend multiple conferences, and meet many other researchers.”

What’s your favorite thing about WPI?

“WPI is a melting pot, enabling everyone to find a group around them with like-minded interests and pursue their passions. For those interested in research, they can pursue it and are encouraged to do so. As a freshman, I was given opportunities I couldn't even dream of, such as leading my own project that included working with Ph.D. students. I was also published for research project as a first author. In other working situations, seniority is the deciding factor, but for WPI, that’s not the case. The amount of work you put into your studies and your passions is quite related to the benefits you see.”

Do you have a faculty or staff mentor?

“Three staff members have stood out as mentors based on their influence on me. First, Professor Rodica Neamtu was the first professor to get me involved in research. She has cultivated me as a student, as a computer scientist, and as a researcher. She gave me projects to work on and lead, and gave me all the tools that have led to me being published as a first author.

“Second, Professor Danielle Cote has enabled me to enter interdisciplinary research and provided me with research in material science. She also brought me to my first conference in the United States with her team and introduced me to many people in the field. I am currently pursuing my BS/MS right now but, upon completion, I will be staying on for my Ph.D. at WPI under the advisement of both Professor Neamtu and Professor Cote.

“Lastly, President Soboyejo has been a mentor. He has included me in many of his projects, especially those relating to sustainability and medicine, which have enabled me to not only perform research, but research that could make a difference in people's lives at a direct level.

“Each of these mentors has provided a tremendous service to me — guiding me based on their experience and opening further doors for me to pursue. Most recently, my work was presented by President Soboyejo at the Nobel Symposium in South Africa with myself as second author.”

How has WPI’s project-based learning influenced your education?

“Project-based learning has played an integral role in my education at WPI and more so than most. Due to AP credit and overloading, I will be graduating a year early. As a result, I am currently doing both my Interactive Qualifying Project and Major Qualifying Project, which means that I have a lot of projects, and not as many classes. With WPI's open curriculum, I have opted to take multiple independent studies instead of taking structured courses. These independent studies have enabled me to pursue my passions while continuing my education. These independent studies allowed me to continue my research and gave me the time to do so. For example, in one of these independent studies, in the seven-week term, I started a project, brought it to completion, submitted a paper to an international conference, and presented as the only undergraduate in attendance later that year. Project-based learning is important because there are so many different ways to learn something — not just the traditional way. I have been able to pursue my studies as if I were in class learning out of a textbook, except I’m gaining more experience, staying more engaged, and building my resume with published articles.” 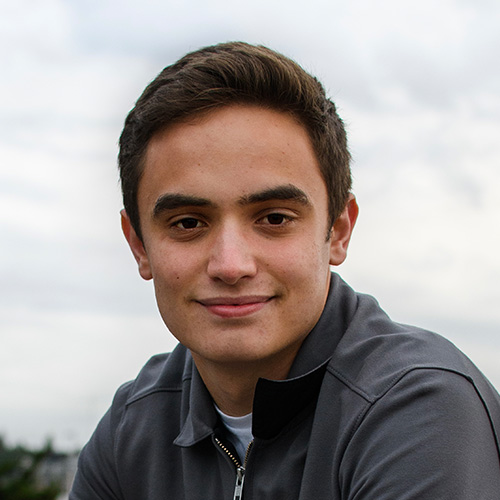 For those interested in research, they can pursue it and are encouraged to do so. As a freshman, I was given opportunities I couldn't even dream of.
Timeline Entry
10:30am

Breakfast and make my way to campus

Meet my study group every morning

Lunch with my study group

Attend the one class I have

Attend a couple meetings for research then finish up some homework

Go home and have dinner with friends

Finish up some homework and any side projects working on

Check out other Student Voices here.