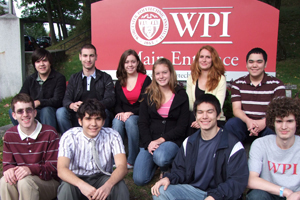 In a demonstration of remarkable loyalty and dedication to their alma mater, two WPI alumni have made generous gifts to the university in recent months that will transform WPI’s ability to attract and retain the best and brightest students. Robert A. Foisie ’56 recently gave $9.4 million to support the Robert Foisie Scholars Fund for undergraduate students, which he established in 2009. George Messenger Jr. ’51 and his wife, Priscilla, announced that WPI will receive more than $6 million from their estate, the funds also used to support undergraduate scholarships, through the George and Priscilla Messenger Scholarship Fund.

“Through these generous gifts—two of the largest in WPI history—Mr. Foisie and the Messengers have greatly expanded our capacity to offer comprehensive scholarship support to bright, talented, and ambitious students who are best suited to succeed in WPI’s culture of high achievement,” says President Dennis Berkey. “They have also provided our community with tremendous momentum for our fundraising initiatives, of which scholarship support is a priority. We are grateful to Mr. Foisie, and George and Priscilla Messenger, for their dedication to WPI.”

The Foisie and Messenger scholarship contributions come at a critical time. Many students face financial challenges due to the sluggish economy and the daunting cost of higher education. Foisie and the Messengers are among hundreds of alumni and friends—and will inspire many more—who have chosen to help deserving young men and women attend WPI by providing much needed financial support. To date, WPI’s scholarship endowment totals $102.8 million. These 374 separately named funds generated more than $5.4 million in scholarship aid during the 2010-2011 academic year for more than 950 awards, augmenting the $42 million WPI spends on financial aid from its own operating funds.

“I hear from students all the time that they would not be able to attend WPI if it were not for this generous scholarship support. Endowed scholarships play a vital role in keeping WPI’s doors open to these high achieving students,” says Kristin Tichenor, senior vice president for enrollment and institutional strategy. “We see so many promising young people who would benefit greatly from a WPI education. With nearly 90 percent of our students qualifying for some form of financial aid, the need is great. Mr. Foisie and Dr. and Mrs. Messenger are ensuring that more of our students have the opportunity to make the most of their WPI education. I believe their actions will inspire others to follow suit and invest in future generations of WPI students.”

A trustee emeritus of the university, Foisie has a long and generous history of philanthropy at WPI, with a particular focus on undergraduate scholarships. Prior to establishing the Foisie Scholars Fund, he had established 17 other undergraduate scholarships, named in honor of WPI professors who influenced his life. He also supported the construction of the university’s campus center in 2001.

Since 2009, the Robert Foisie Scholars Fund has provided scholarships for up to 10 incoming undergraduate students, chosen from the top of the class, each year. Each Foisie Scholar receives a four-year, full-tuition scholarship and a one-time allowance to be used for a WPI Global Studies experience. WPI currently has 23 Foisie Scholars: 10 entering their junior year, five entering their sophomore year, and eight incoming first-year students.

According to Foisie, who himself received scholarships as a WPI student, “During my time at WPI there were several faculty members who made a lasting impression upon me during my student days through their professional competence and their concern for students. Those fond memories have fueled my dream of establishing a scholarship fund to support qualified students with financial need and a burning ambition to make a difference in the world.”

Foisie received a mechanical engineering degree from WPI and a master’s degree from Cornell University in 1958. As a young engineer, Foisie found a way to simplify the design of a fuel control valve for jet aircraft, which led to a patent. Among his many credits, Foisie is founder and former president of Matik North America Inc. in West Hartford, Conn., an import, distribution and service firm specializing in paper-processing machinery. Foisie also owned a Swiss company that makes cartoning and packaging machinery. He began his career as an engineer at Hamilton Standard Co. and later served as chief production engineer at Pratt & Whitney in Hartford, Conn. His current entrepreneurial and business interests span telecommunications to real estate.

Scholarship support has long been a philanthropic priority for George and Priscilla Messenger, as well. A child of the Great Depression, George Messenger has experienced firsthand the financial burden of a college education. Priscilla comes from a long line of educators and understands the critical role of education in individual success and achievement. With these values in mind, they established the George and Priscilla Messenger Endowed Scholarship Fund in 2001. Their latest gift, made through a bequest, will be added to this fund.

“I firmly believe that students should not be burdened with a heavy debt load when they graduate from college,” says George Messenger. “WPI provided me with a scholarship that—combined with outside jobs—enabled me to complete my studies. I was 16 when I entered WPI and graduated with a degree in physics. WPI provided me with the solid education that made my successful career possible.”

Messenger went on to earn a master’s degree in electrical engineering from the University of Pennsylvania and a PhD in engineering from California Coast University. He has had a significant impact on technologies that allow satellites to work and communicate successfully in space today. His discoveries include the Messenger-Spratt Equation, which describes the effects of neutron radiation on bipolar devices, and the Kirk Effect—also called current-induced base push-out—an apparent increase in the width of the base of bipolar transistors that occurs at very high injection levels and current densities. Messenger’s discoveries showed how electronics could be hardened against the effects of radiation. The work resulted in several patents in the fields of microwave diodes and semiconductor hardening and more than 50 refereed technical papers.

Messenger also contributed to the development of the EKG and the hardening of circuits for the atomic clock in the Global Positioning Satellite. He also conducted research at the Naval Research Laboratory on a proton radiator for fighting cancer that localized radiation damage to the area of the body being treated. This research earned him the Alan Berman Research Publication Award from the Naval Research Laboratory. Messenger also received the Annual Merit Award from the Institute of Electrical and Electronics Engineers (IEEE) Nuclear and Plasma Sciences Society, the Peter Haas Award for outstanding technical contributions to hardened military and space systems, and election as a life fellow in IEEE for his contributions to the determination of radiation to semiconductors and advances in semiconductor technology. He is the co-author, with Milton Ash, of The Effects of Radiation on Electronic Systems—considered the definitive work in the field—and Single Event Phenomena. In recognition of his pioneering work on the hardening of electronic systems, Messenger received an honorary Doctor of Engineering degree from WPI in 2009. Just recently, the Messengers were both awarded honorary doctorates by Hillsdale College, George in science and Priscilla in business.