Supporting the Sports and Recreation Center 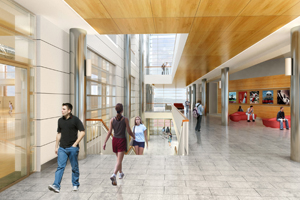 “The new Sports and Recreation Center will be an inspiring place for the WPI community to come together for camaraderie, competition, and celebration; and is essential to our ability to provide a world-class learning and living environment for our campus community,” says WPI President Dennis Berkey. “We are grateful to the Fuller Foundation for helping to make possible this vital new addition to our campus.”

The facility, built into the hillside at the west end of the Quadrangle, will house a four-court, 29,000 square-foot gymnasium circled by an elevated three-lane jogging track; a 25-meter pool for swimming and diving with seating for 250 spectators; a 14,000-square-foot fitness center with separate areas for physical education classes; three convertible squash and racquetball courts; an eight-person rowing tank; rooms for dance, yoga, and other recreational activities; multipurpose meeting rooms; well-equipped locker rooms; a training and rehabilitation suite with two hydrotherapy tanks; and offices for coaches, staff members, and students. Barbara Donahue, a longtime friend of WPI, has named the Donahue Rowing Tank. WPI Trustee Stu Kazin ’61 and his wife, Ellen, have named a conference room in the center. The Daniels Foundation has named a women’s general locker room. Elliot Whipple ’67 and Beth and Raymond Dunn ’78 have named pool lanes through their contributions.

In addition to supporting the growing recreational and wellness interests of students and the needs of WPI's competitive varsity and club sports programs, the building will provide attractive space for large-scale events, including admissions open houses, career fairs, and national academic conferences. It will also have space dedicated to WPI’s robotics program, including a pit area for regional and national robotics competitions.

“The Fuller family is proud to continue its support for WPI by contributing to the Sports and Recreation Center,” says Mark Fuller, chairman of the Fuller Foundation. “We have long admired WPI and recognize the value it brings to its students, to the Worcester community, and to society. This new center of excellence will enrich the campus community and serve as a powerful symbol of the spirit of innovation that marks every aspect of WPI’s approach to education.”

The multilevel Fuller Atrium will provide views of the Quadrangle and the campus to the east and the playing fields and Bancroft Hill to the west through large expanses of glass. Interior windows will look in on the gymnasium. It will be the first view visitors will have of the new center’s interior, and is expected to be a featured stop on campus tours. The atrium will also be a popular spot for social events and gathering place for the community.

This gift continues a legacy of enlightened philanthropy established by George F. and Sybil H. Fuller, who were deeply committed to WPI and its mission. George Fuller served for decades as a trustee, beginning in 1920, and the foundation he established has supported the university generously for so many years, starting with a gift in 1964 to establish and endow the George F. Fuller Professorship in Mechanical Engineering.