A Legacy of Music and Learning

A significant bequest from the late Herman Medwin ’41 will ensure that WPI students and the campus community will be enriched by the Medwin String Ensemble and Medwin String Honors Quartet for generations to come. 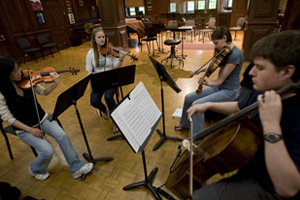 A significant bequest from the late Herman Medwin ’41 will ensure that WPI students and the campus community will be enriched by the Medwin String Ensemble and Medwin String Honors Quartet for generations to come.

In 1987, world-renowned acoustical oceanographer and music enthusiast Herman Medwin ’41 and his wife, Eileen, established the Medwin String Ensemble Endowed Fund at WPI. In 1989, the Medwins created the Medwin Chamber Music Scholarship, which awards scholarships to the four members of the Medwin Honors Quartet, who are selected from the String Ensemble each academic year.

The Medwin scholarship has benefitted nearly 100 students over the past 20 years, and many more have enjoyed perfecting their music skill and performing as part of the string ensemble. To Professor Douglas Weeks, director of WPI’s music program, even more remarkable is how Herman Medwin created an outstanding string program where there was none.

“WPI did not have a string program when I became the music program administrator,” Weeks explains. “Part of my job was to identify string players in the student body—because there was no such thing here.” A portion of Medwin’s original gift was used to hire a part-time string instructor to get the program off the ground. It started slow, Weeks says, but the string ensemble and quartet have become thriving and vital components of WPI’s music program.

Weeks says that the music program in general, and the orchestral program in particular, are quite attractive to high school students who want to continue their music studies. WPI students can minor in music, or they can major in humanities and arts with a concentration in music. Many also focus their project work on music.

The string ensemble and honors quartet were born of Herman Medwin’s own love of string music. He came to WPI already a skilled violinist. As a freshman, he earned a place in the Worcester Philharmonic Orchestra and performed with that group throughout his undergraduate years. In 1939, he co-founded the Worcester Tech String Ensemble. Many years later, in a letter to then WPI president Jon Strauss, he wrote, “One of the happy memories of my days at WPI was of the string ensemble that we, as students, organized for our extra curricular enjoyment.” In another letter, Medwin noted his interest in turning “young science-loving musicians into WPI musician scientists.”

Medwin’s career also followed sound waves. After graduating from WPI with a degree in physics and an interest in sound and vibration, he worked at Pratt & Whitney’s engine test and inspection group. In 1943, he joined the U.S. Air Force and served in the European Theater as a weather observer. He then earned a master’s degree and PhD at the University of California, Los Angeles.

In 1955, Medwin joined the faculty at the Navy Postgraduate School (NPS), where his academic achievements are legendary. He taught ocean acoustics and conducted visionary research on the use of sound waves to measure and learn about ocean physical and biological processes. C.S. Chiu, distinguished professor of oceanography at the NPS and a friend and colleague of Medwin, described him as the “father of fine scale acoustical oceanography.” Chiu notes that Medwin was the lead author of two textbooks—Acoustical Oceanography: Principles & Applications (1977) and Sounds in the Sea: From Ocean Acoustics to Acoustical Oceanography (2005)—that defined the field. Among his many honors, awards, and achievements, Medwin holds several patents related to underwater acoustics and was awarded the highest recognition from the Acoustical Society of America, the Gold Medal, for his innovative research in ocean acoustics and leadership and service to the Society. He also received an honorary degree from WPI in 1992 and the Alumni Association’s Robert H. Goddard Award for Outstanding Professional Achievement in 1991.

Generous by nature, Chiu says, Medwin dedicated much time and expertise to his colleagues at the NPS. Chiu especially remembers Friday lunches with Medwin and colleagues.

“The lunch was always colorful, debating politics and discussing where we should go in our field in terms of research.”

Music remained an important part of Medwin’s life, Chiu adds. The second floor of his home was an office and music room, where Medwin practiced his violin. Chiu says that music is a good complement to Medwin’s very disciplined field of research. Medwin’s insights about the connection between science and music is quoted in the citation for his WPI honorary degree: “It takes tenacity to study a string instrument and stick with it, and one needs imagination to perform and interpret music well. A scientist also needs those characteristics to be successful, but in reverse order—imagination to develop an idea and tenacity to see it through.”

Through his generous philanthropy, the Medwin name will be synonymous with bringing great music and science together at WPI.