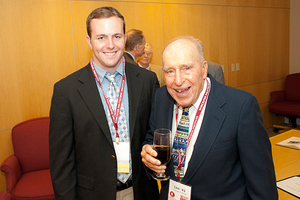 Leonard White ’41, a WPI trustee emeritus, has made a $1 million bequest to his alma mater to support student financial aid. The Leonard and Ann White Endowed Scholarship Fund honors White’s late wife and represents his gratitude for her support during their life together.

“Ann did half the work, she should get half the praise,” says White, who wanted to remember her in a special way. “She worked very hard for WPI.”

The scholarship fund is an especially fitting tribute, since White proposed to his wife on Earle Bridge. Ever since then, WPI has remained an integral part of their lives, with Leonard and Ann working together to advance the university. White’s generous gift also supports a critical priority for the university—student financial aid.

White understands firsthand the financial demands of a top quality higher education. Growing up just a few miles away in Auburn, Mass., White says WPI was the obvious choice for his college education. His father, a contractor, lost much of his business during the Depression, making WPI all the more attractive—White could live at home and work part-time for a local water company to pay his way through an excellent engineering program. White clearly recalls his earning power—50 cents an hour—which paid his annual tuition bill of $320. After graduating with a bachelor’s degree in mechanical engineering, White took a position with the Public Service Electric and Gas Company of New Jersey for a 44 percent pay increase to 72 cents per hour.

In 1943, with World War II enveloping the United States, White enlisted in the Navy as an engineer officer and served in the Pacific Theater, eventually as an executive officer and navigator. At the close of his service, White returned home and began working for the family business, R.H. White Construction Co. When his son, David White ’75, enrolled at WPI, White became more involved with the life of his alma mater once again.

Among his many activities, he has served on reunion committees and as a class agent, participated in fundraising initiatives, and has attended many WPI events over the years. During his time on the Annual Fund Board, White established the President’s Advisory Council. This group of leadership donors to WPI started with 30 members. Today this group, known as the President’s Circle, is several hundred strong. White served as a WPI trustee from 1977 to 1992, contributing his time and expertise to many campus initiatives.

“I’m pleased to be able to do this for WPI,” says White. “I’ve enjoyed my relationship with the university, and I hope it will continue. It’s a pleasure to have my name associated with WPI.”