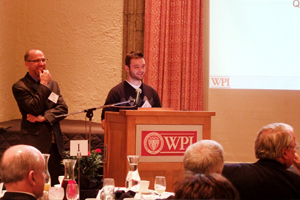 On January 25, 2011 representatives from Worcester foundations and agencies gathered at Higgins House to celebrate the first 10 years of the Worcester Community Project Center and the transformational impact it has had on the city.

On January 25, 2011 representatives from Worcester foundations and agencies gathered at Higgins House to celebrate the first 10 years of the Worcester Community Project Center and the transformational impact it has had on the city.

The Worcester Community Project Center was established in 2000 thanks to $1.85 million in generous support from these Worcester foundations: Stoddard Charitable Trust, Fletcher Foundation, Ruth H. and Warren A. Ellsworth Foundation, Mildred H. McEvoy Foundation, Hoche-Scofield Foundation, and the Fairlawn Foundation. As part of WPI’s distinctive Global Projects Program and network of project centers around the world, the Worcester center integrates undergraduate engineering and science education, community service, and solving real-world problems in the city. This project experience, known as the Interactive Qualifying Project (IQP), is central to WPI’s unique educational approach. The IQP challenges every student to address a problem that lies at the intersection of science or technology with social issues and human needs.

“I can’t tell you how proud I am of our students and the work they do around the world and especially in Worcester,” said President Dennis Berkey in his remarks at the event. “We look forward to the continuation of our partnership with you.”

WPI Trustee Warner Fletcher provided a donor’s perspective of the Worcester project center. Fletcher has associations with many Worcester foundations and is treasurer of the Fletcher Foundation and trustee and chair of the Stoddard Charitable Trust. He described his experience as a judge for the WPI President’s IQP Award, which showcases four of the best IQPs each year.

“I was blown away by the amount of work and time these students put into these projects,” Fletcher said. “I give all the credit to President Berkey and the team at WPI for making these projects possible.”

According to Rob Krueger, geography professor and director of the Worcester Community Project Center, 89 projects have been completed since the center’s founding in 2000. These projects have involved a total of 300 students and 20 faculty, with an estimated economic impact of $3.75 million.

“I tell students that Worcester is the only project center in the WPI network that allows you to give back to the community in which you live,” Kreuger said.

Two project teams illustrated this point. William Huard ’12 and Michael Szkutak ’12 presented their work in fall 2010 to develop concepts and designs for wind and solar exhibits at the EcoTarium, a museum of science and nature in Worcester. They also developed educational materials and finished preliminary work on a wind exhibit.

“The students were wonderful,” said EcoTarium President Steve Pitcher. “They really helped us think about how to present solar and wind power to our audiences.”

Evan Sawyer ’11 presented his work in spring 2010 with AIDS Project Worcester to design a community garden that considers the cultural and nutritional needs of the agency’s clients. The student team developed the design and layout for the garden. They also helped build the garden in fall 2010 on land donated by Allen Fletcher, Worcester businessman and brother of Warner Fletcher. The garden currently has 15 beds and is expected to serve 100 to 200 people. AIDS Project Worcester hopes to double the garden to 30 beds this year and is also considering the development of an educational manual and a community kitchen program.

According to Joe McKee, executive director of AIDS Project Worcester, the agency had been discussing a community garden for years. A diet of fresh foods is important for those with AIDS, he said.

“Without the assistance of the students and WPI, this garden never would have happened,” McKee said. “I’m very proud of what these students have done.”