On display now at Gordon Library: WPI’s rich legacy as told through a look at its presidents 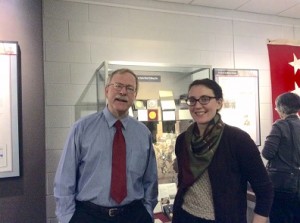 The new exhibit “From the Corner Office: The Lives and Work for WPI’s Sixteen Presidents” opened with a Dec. 16 reception and will run through March. It tells the story of WPI — from Charles O. Thompson, president when the Institute opened in 1868 with a three-year course of study, to current president Laurie Leshin, the first woman to hold the office—and the history, challenges, and accomplishments of each throughout the years.

The ambitious undertaking is the work of co-curators Michael Dorsey, director of research communications; and Molly Bruce, former access and outreach archivist. The team behind the collaboration also included Jessica Branco Colati, assistant director for curation, preservation, and archives; Kathy Markees, special collections curator; and Lora Brueck, a retired assistant director for Gordon Library who was WPI’s first archivist early in her career. Brueck stepped in to help in the project’s crucial final stages, Dorsey says.

“Exhibits look easy to do,” he says, “but there is a lot of work involved — a lot of work.” The library identified the exhibit as the first in a series of exhibits tied to WPI’s Sesquicentennial back in April, says Colati, and invited Dorsey to co-curate it with Bruce.

From the first president — when WPI’s graduating class numbered 32 — to the 16th, with enrollment at over 6,050 according to 2014 figures, differences are evident. 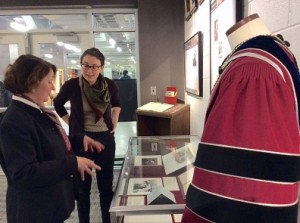 “I was struck by the personal nature of relationships [past presidents had] with members of the WPI community,” says Colati. “That harkens back to their working daily with students. But with the current president now on Twitter, it’s not that different, it’s just that technology’s involved now.”

Presidents have left a wide variety of items to the university, such as papers or objects related to their career [the exhibit includes a teapot donated by President Thompson, for example], Dorsey says. In addition, the archives staff works with the Office of the President to transfer papers, media, and other records and objects as each administration ends. These include, for instance, the robe worn by President Dennis Berkey at his inauguration, which is displayed with a medallion given to earlier presidents at inauguration. 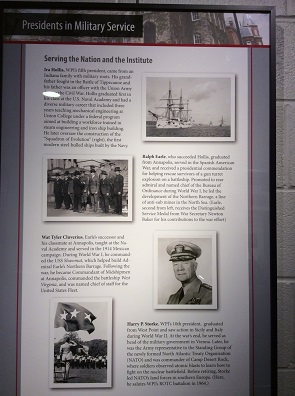 One display showcases the four presidents who came to WPI after distinguished military careers: three were officers in the U.S. Navy and the 10th president — Harry P. Storke — was in the U.S. Army.

“He set the WPI Plan in motion,” Dorsey says of Storke, a retired lieutenant general, veteran of World War II and the Korean War, who led the college from 1962 to 1969. The exhibit includes his rank flag, his sword and bullion hat, and mementos of his service in NATO. Another case contrasts the careers of two presidents who won recognition as planetary scientists: Thomas Mendenhall, who studied the Earth in the late 19th century, and President Leshin, a geochemist and space scientist who has an asteroid named for her.

The exhibit also depicts WPI presidents as builders, with artifacts from major campus construction projects completed during their tenures; presidents at home, in presidential houses that were both private spaces and public venues; a focus on the WPI archives and its processes; and a sampling of presidents’ observations about the Institute, Dorsey says.

Colati notes that the exhibit has an interactive element: an iPad with access to President Leshin’s Twitter feed and the Sesquicentennial website, along with recordings of past presidential address and inaugurations. She also is working to have the exhibit available online, calling it “a wonderful way to extend the life of the exhibit.”

The exhibit is at the Gladwin Gallery, Level G, of Gordon Library.