BBC Culture recently recommended its list of “Ten Books to Read in December,” and WPI professor Joshua Harmon’s newest short story collection made the cut. The work is called History of Cold Seasons, published by Dzanc.

In a column titled “Between the Lines,” author and BBC book critic Jane Ciabattari states: “In a dozen oblique, sometimes experimental stories, Harmon, author of the novel Quinnehtukqut (2007), captures the harsh and austere beauty of New England. … A remarkably assured and poetic first collection.”

Harmon is an assistant teaching professor in the Humanities & Arts department. Now in his second year on campus, creative writing is at the center of his teaching. Included among his professional highlights is the Cabell First Novelist Prize finalist in 2008 and a National Endowment for the Arts Literature Fellowship in 2004.

Harmon cites modernist writers such as William Faulkner and Virginia Woolf as influences in his early development. “My novel is an homage to both The Sound and the Fury [Faulkner] and to Woolf’s Jacob’s Room,” he says.

When I was 19, I didn’t think I’d be a professor someday, but by the time I got to graduate school and teaching was part of the program, I really loved it.
Joshua Harmon

History of Cold Seasons was also singled out by the online weekly fiction magazine Electric Literature. In its “Recommended Reading” column, Harmon’s story “Rope” is excerpted. It opens with the incendiary line: “Our brother keeps a girl tied to a tree in the woods.”

In his editorial notes, Halimah Marcus makes mention of Harmon’s use of the line, which is repeated throughout the short story “becoming an incantation that fulfills its own hypothesis.”

“The way that the phrase is turned and twisted, reused and made new again, is a testament to Harmon’s secret life as a poet,” Marcus says. “Well, not so secret; he’s published two poetry collections, along with a novel and a collection of essays. But he’s a poet even when he writes fiction, keeping track of words like an adept air traffic controller: it’s a recursive chaos of crossed paths that the reader experiences as order. But, like the best poets, Harmon is also a storyteller.”

Marcus also notes that “Rope” is no coming of age story. She says it’s too unconventional, but it does capture, “in a completely original way, the alluring mystery of adolescence. It’s sexual curiosity before sexuality. The scene the narrator and his sister imagine is at once prurient and innocent: their brother keeps a girl tied to a tree in the woods, but when he goes to see her, he only asks to hold her hand.” 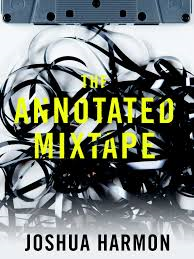 History of Cold Seasons is one of two books the author recently had published. The other is The Annotated Mixtape, a memoir about growing up in Worcester that was published simultaneously by Dzanc.

In a recent conversation with the author in the café at Gordon Library, Harmon talked about his life in the writing game. “I don’t know if there was an epiphany or one specific moment where a light bulb went off,” he says. “I’ve been writing for years. I write in the Mixtape book about a ’zine that my friend and I used to do when we were in high school. So it is at least that far back. I was writing fiction, poetry, and articles about the Worcester scene. I think if I wasn’t writing, I wouldn’t be happy.”

Harmon says although writing is something that he has always done, teaching just happened. “When I was 19, I didn’t think I’d be a professor someday, but by the time I got to graduate school and teaching was part of the program, I really loved it. I felt like it was something that I wanted to keep doing, absolutely.”

When asked what Harmon is working on, he says, “a new book of poems, a new book of non-fiction—it’s about 1977 and everything from disco, Star Wars, video games, homesteading, to EST, and all the crazy stuff that was happening around that time. And I’m working on another novel, as well. For me, I need to keep different things going at the same time.”

Also in the works is an on-campus reading. Watch the HUA calendar listings for upcoming dates.