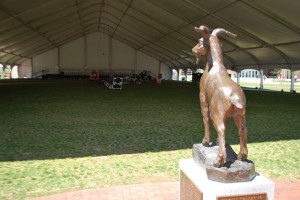 Some things will be the same during this year’s Commencement week. Degrees will be awarded. There will be caps and gowns. Excited students and their loved ones will gather on the Quad. But this year, Commencement arrangements have been changed to recognize the increasing importance of the university’s graduate programs.

This year is the first time master’s and PhDs will be awarded during their own ceremony, to be held Thursday, beginning at 5 p.m. The ROTC Commissioning Ceremony will be held the next day, along with the Baccalaureate Ceremony that evening. The bachelor’s degree candidates are awarded their degrees the day after that, Saturday, at 10 a.m.

WPI’s first ever graduate commencement is a reflection of the growing stature of its graduate programs, which have expanded substantially—in size, diversity, and international recognition—since the university awarded its first master’s degrees in 1898 and its first PhD in 1960. This year, more than 750 graduate degrees will be conferred. 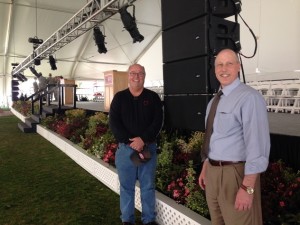 Snoddy says that the Commencement Planning Committee — about 40 members strong with representation across all departments — made the suggestion last May to split the bachelor and graduate programs into two separate events.

Parents and students were informed of the change last fall.

But splitting one event into two and rolling all the related events into the tent involves double the work, Snoddy said. Rental times for the tent, stage and chairs are extended; more staffing needs to be on site; as well as safety and security personnel. 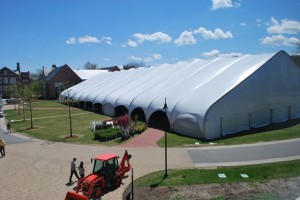 “Safety and security is in place over the course of the whole week,” he says. “The tent is a point of commitment to the students having an excellent sendoff. … We want to celebrate the students, no matter what degree they’re getting.”

In addition to the grounds work, the registrar’s office will be assembling sets of diplomas in alphabetical order for two ceremonies, he added.
It is estimated to take 15 to 20 workers an entire day to get the chairs properly lined up for Thursday’s graduate ceremony.

A longer tent is also being used this year: 120 by 240 feet, as well as a projection system so attendees sitting in the back can see what is going on up front. Add to that the fact that administration hasn’t done these events this way before.

“Much of what we are putting together is unbeknownst to us,” said Snoddy. 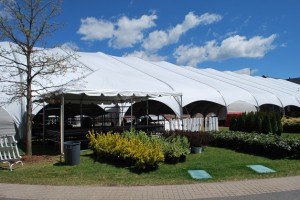 He and Terry Pellerin, associate director of buildings and events, pointed out that the area to the front of the stage set with flowers and shrubs used to be contained by 2X4 timbers, which were not used for the purpose again. This year, Facilities carpenters have constructed a decorative wooden latticework, painted white, that will be used year after year.

“It’s one way we can reduce our cost, and still have a wonderful ambiance here,” Snoddy says.

The end result will be a better and more personalized experience for graduates and attendees alike.

Thursday’s ceremony, for example, for graduate and Ph.D. students, is expected to be about an hour and a half, compared with the three-and-a-half-hour joint ceremony of the past. Holding two events also allows for more personalization for the different audiences. Both classes now will have the opportunity to receive messages tailored to them.

After this year, Snoddy said, the logistics of planning the two events will go much smoother, and ultimately, the ceremonies will hold more meaning for those attending. In addition to less-crowded conditions, “they will get a program tailored that is of most interest to them,” he said, with more individualized planning possibilities on the horizon.