NSF director: “Embrace uncertainty and prepare to be surprised.” 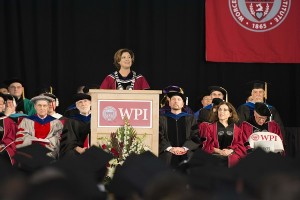 President Leshin spoke about her own experiences as a graduate student.

As they assembled beneath the white tent on the Quad, hundreds of master’s and PhD students at WPI’s first-ever Graduate Commencement ceremony were greeted by sunny skies, a warm evening breeze, and a shorter, more intimate event than those in previous years.

The Institute’s 148th Commencement marks the first time WPI celebrated the completion of graduate and undergraduate degree requirements with separate ceremonies. The decision to hold two events was a reflection of the growing stature of WPI’s graduate program, which has expanded substantially—in size, diversity, and international recognition—since the Institute awarded its first master’s degrees in 1898 and first PhD in 1960. At the graduate portion of the 148thCommencement, which ran from 5 to 6:30 p.m. yesterday (May 12), WPI awarded 705 master’s degrees and 35 PhDs.

France A. Córdova, director of the National Science Foundation, gave the commencement address. Córdova, who holds a PhD in physics, spoke about her connection to WPI through one of its most famous alumni: Robert Goddard ’08, the father of modern rocketry. She described her experiences as a graduate student building and launching rocket payloads at a missile range and monitoring a high-energy astronomy observatory at the Goddard Space Flight Center. 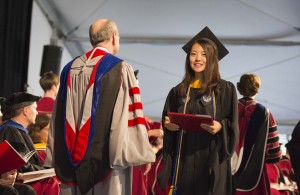 During the 148th Commencement, the Institute awarded 705 master’s degrees and 35 PhDs.

“All I knew was that it was a thrill to be part of America’s space program, and the wonderful things we were going to discover, and the mysteries we were going to solve,” said Córdova. “And to think, Robert Goddard, here on your campus, is credited with being the person who ushered in the Space Age.”

Since her days as a graduate student, Córdova has had an impressive career, becoming the Chief Engineer at NASA in 1993, and more recently, the second woman and first Latina to lead the NSF. However, as she explained to the graduates, she almost took a completely different path when she earned her undergraduate degree in English.

“Although I loved physics since I was a young girl, I was discouraged from it by teachers and parents. It was an era when college was often thought as a finishing school to prepare young women for marriage, not a beginning school to prepare them for what they would become. It was only after I graduated that I was inspired to return to my original dream of becoming a scientist,” she said. 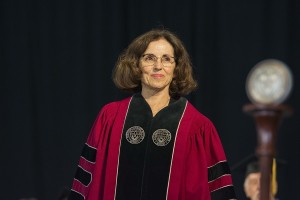 France A. Córdova, director of the National Science Foundation.

She praised institutions like WPI for broadening opportunities in STEM for underrepresented groups and said she hoped graduates would also take another message from her circuitous journey: “Prepare to be surprised—not at world events or at the fortunes of others—but surprised at yourself, at what you can do if you tap into your natural passion.”

In closing, Córdova returned to the subject of Robert Goddard and told a story of how he was once ridiculed by the New York Times for his assertions about rocket flight. She reminded students that they, too, might encounter challenges, but urged them to follow the example set by Goddard as well as other innovators, like Albert Einstein, whose theory of gravitational waves was only recently proven by the scientific community.

“Goddard did not believe that anything was impossible,” said Córdova. “He had a big dream. That dream took us to the moon, and one day it will take us farther. And your dream, too, graduates, will take you far, and it will be fueled by your imagination.” 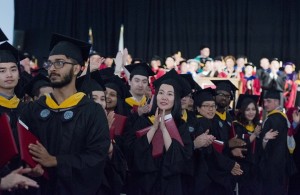 The university’s first Commencement for master’s and PhD degrees is a reflection of the growing stature of WPI’s graduate program.

In her speech to the Class of 2016, President Laurie Leshin began by thanking Phil Ryan ’65, the current chairman of the WPI Board of Trustees, who is stepping down from his role in June. Ryan has played an active role in the WPI community for several decades, including serving as interim president in the 2013–14 academic year. “I could not have asked for a better partner, mentor, and boss in my first two years at WPI,” said Leshin, “and WPI could not ask for a more devoted supporter.”

Like Córdova, Leshin also spoke about her own experiences as a graduate student, describing how she conducted her cosmochemistry research in an isolated and windowless lab under a staircase—until news that scientists had found possible fossils of bacteria on Mars made national news headlines and enthralled the world with the idea that life might have existed on Mars.

“At that moment, what really hit me was the potential of my work to touch so many people in a fundamental way,” she said. “That was the moment when I revised my thinking, the moment when my future became limitless. And yours is too.” 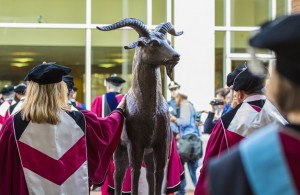 During the procession out of the tent, many of the graduates gave Gompei a farewell pat.

She closed her speech by making two requests of the graduates: that they stay connected with the WPI community, and that they use their education to make a difference in the world. “Your WPI education has prepared you to make an impact on a much broader stage,” she said, “… and, so, apply what you have learned here for doing good. I, for one, can’t wait to see what you achieve.”

Student speaker Shaymus Hudson, who received his PhD in Materials Science and Engineering, compared the graduate student journey at WPI to that of summiting a mountain. Recalling famous mountaineer Sir Edmund Hillary’s sentiment that “it is not the mountain we conquer, but ourselves,” Hudson noted that graduates had learned just as much from their struggles as from their achievements.

“In our journey, we’ve had our resolve tested in dealing with experiments that would never work, chemicals that would never react, code that always had n+1 bugs, and journal editors that would never fully accept revisions,” said Hudson. “We’ve had to trudge through the realities of scientific funding and endless stacks of papers to review. We have learned to evolve and persist in the face of pressure and ever-present self-doubt. This growth is where the true congratulations lie.” 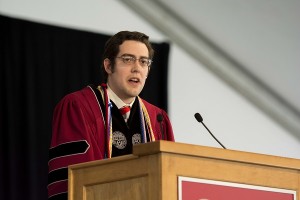 Like Córdova and Leshin, Hudson also spoke about the transition graduates will face as they leave academia, and he reminded them that their education at WPI has prepared them to make an impact:

“As newly minted doctors of philosophy and master’s recipients, you must be the leaders, for you have demonstrated a mastery of that one most essential skill not to be underestimated—the ability to think, to consider the global and the long term and not just the here and now, to understand what innovation and impact truly mean.”

The procession of graduates was led by the honorary marshal, Richard Sisson Jr., George F. Fuller Professor of Mechanical Engineering, who received the 2016 Board of Trustees’ Award for Outstanding Research and Creative Scholarship in April. Among the degree recipients graduates were winners of the Sigma Xi Graduate Research Award, American Heart Association Fellowship, IGERT Fellowship, i3: Investing in Ideas with Impact Award, and Graduate Research Innovation Exchange First Place Awards.

The 2016 Undergraduate Commencement ceremony will be held on the Quad at 10 a.m., Saturday, May 14.