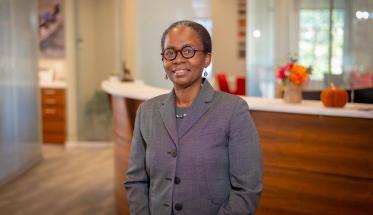 ACE Fellow Sees WPI as Model for Leadership and Equity

Jillian McLeod was grappling with issues around systemic inequities in higher education when she first crossed paths with Laurie Leshin. The WPI president was leading the New England Commission of Higher Education’s accreditation committee at the U.S. Coast Guard Academy (CGA), where McLeod is an associate professor of mathematics and chair of the Academy’s equity taskforce. She immediately was taken by Leshin’s leadership style.

“She won me over. I’ve never been that close to a leader with so much poise, especially in a very male-dominated context that is the CGA leadership,” McLeod says. “She left a memorable mark on me.”

When McLeod was nominated for an American Council on Education (ACE) fellowship, a mentorship program that embeds emerging leaders at colleges and universities, she placed WPI in the top tier of her list. After learning of Leshin’s commitment to diversity, equity, and inclusion, WPI rose to No. 1.

Since its inception in 1965, the ACE Fellows program has strengthened institutions in American higher education by identifying and preparing more than 2,000 faculty, staff, and administrators for senior positions in college and university leadership through its distinctive and intensive cohort-based model. ACE fellows select host institutions for their rigorous academic environment, their high-quality education, and their investment in the future of higher education senior leadership.

As an ACE fellow, McLeod, who lives in Springfield, Mass., is spending the first half of the academic year at WPI, observing and working with Leshin and her leadership team. She will shadow University of Massachusetts-Amherst Chancellor Kumble Subbaswamy during UMass’s spring semester.

“Jillian brings a wealth of higher education expertise and a passion for expanding diversity in STEM, and we are honored she chose to spend her fellowship with us,” says Leshin. “By actively participating with the leadership team, she will see firsthand what makes our university––and our community––so special, while we’ll have the opportunity to learn from her experiences and perspectives. I’m proud WPI can play a role in opening doors for tomorrow’s leaders in higher education.”

McLeod is intrigued by WPI’s vision of project-based learning as a “launching pad” for racial literacy. “Sending students into communities throughout the world to tackle real-life problems can open minds and break long-held assumptions,” McLeod says. “That, rather than simply focusing on bringing more people of color into STEM, has the potential to reshape the discipline by cultivating diverse perspectives.  The way we conceive inquiry, truth, knowledge––those are informed by who is present.”

She illustrates this by pointing to her own experience as a Trinidad native who received a Eurocentric education. She went on to earn her undergraduate degree at Hunter College and both her master’s and PhD in pure mathematics from Howard University, but it wasn’t until she was appointed to lead the equity task force at the Coast Guard Academy that she began to question the origin of her values.

“Prior to that," McLeod says, "the value system I embraced was the one that academia said was most important, even though it disenfranchised me.”

She aspires to be a leader who brings a wide swath of the community to the table to inform decision-making and create meaningful change. She has been working on that since the Coast Guard Academy established its equity taskforce in response to a 2017 report by the Center for Urban Education at the University of Southern California that revealed disparities among cadets of different races.

At the Coast Guard Academy, McLeod broadened the scope of the task force to identify and address inequities across the community. As a member of its senior leadership team, she has incorporated concerns about equity and inclusion in all decision-making processes. Her mission is to return to the Academy with recommendations for changes in its approach to student learning and engagement. She also plans to submit a proposal for a National Science Foundation ADVANCE grant. WPI’s success with winning an ADVANCE grant to build a more equitable faculty promotion process was another draw when McLeod put WPI at the top of her fellowship list.

“On a very meta level, I would like to return to CGA with a lot of the leadership examples that Dr. Leshin and her team embody—their values are all different and they are all valued by her,” McLeod says. “She is such a great leader and an outcome of that is collecting great leaders.”