Junior Katherine Amato has been selected by the Barry M. Goldwater Scholarship and Excellence in Education Foundation for an honorable mention. 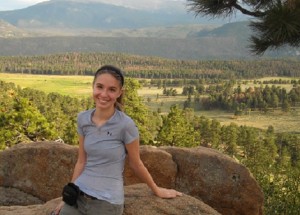 Katherine Amato is one of 22 WPI students who have been named scholars or honorable mention recipients in the Goldwater scholarship competition.

“I kept a close eye on my email … and asked my parents to watch our mailbox” after applying, says Amato, who is working on her IQP in Australia. “There is a significant time difference between the East Coast and Australia, and I received a congratulatory email from Professor [Tina-Marie] Ranalli during my lunch break on April Fools’ Day. Thankfully, it was no joke, and I was very excited to have been honored by the foundation,” she says, via email.

As an honoree, Amato is in good company, says Ranalli, adjunct teaching professor and advisor for fellowship and awards. Since 2002, some 22 WPI students have been named scholars or honorable mention recipients in the scholarship competition. However, Amato’s honor is unique in some respects, Ranalli says.

For one thing, Amato got in touch with her about the award—early—far in advance of any emails promoting the award or campus information sessions, Ranalli says. “The internal applications are not due until December,” yet Amato reached out to Ranalli in August of 2014. “This is the type of student you would expect to win this kind of application—proactive.”

“I remember receiving an email as a sophomore about the award and its requirements, and told myself that I would be a more qualified applicant after an additional year of study,” Amato says. “It was something that I kept in the back of my mind until it came time to apply, and then I just did it.”

Amato, an upstate New Yorker majoring in biochemistry, not only knows she wants to pursue a PhD in virology. She also knows that she wants to research infectious diseases, has completed an REU at the Wadsworth Center of the New York State Department of Health, and is now researching the use of animal proteins to target cancer cells.

“She took away a clear sense of the type of research she wants to do going forward,” says Ranalli. “At the undergraduate level, that’s not exactly a common thing.”

Amato says she feels fortunate to have discovered fields of study that, for her, cover all the bases. “Virology and immunology are fields of great interest to me, and conducting research where these areas intersect will satisfy my desire to contribute to the scientific community in a meaningful way,” says Amato.

This year, 260 Goldwater Scholars were selected on their academic merit nationwide, from a field of 1,206 mathematics, science, and engineering students. Of those 260, 115 are women. Most are majoring in science, though many have dual STEM majors. Ranalli says recent Goldwater scholars have gone on to attain Rhodes Scholarships, Marshall Awards, Churchill Scholarships, and National Science Foundation Graduate Fellowships.

“So [the Goldwater Foundation] is basically saying [recipients] are top future researchers in STEM in the U.S. And she is only in her third year,” says Ranalli of Amato.

The honorable mention for Amato is a step and a source of pride in her burgeoning research career. “The effects of infectious agents on the human body as a whole and at the cellular level fascinate me. I am fortunate enough to have become involved in research at a young age. … Each laboratory experience has exposed me to different aspects of biological research. It is an incredible honor to have my achievements recognized by the foundation.”