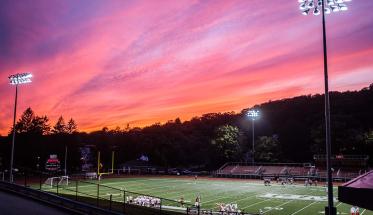 The Earle Bridge crossing, not stepping on the seal, celebrating Gompei’s birthday—traditions abound at WPI, and the football team is well on its way to cementing one of its own, one that regularly has the potential of saving a life.

Four years ago, the team made the decision to join nearly 100 other college and university football teams in Get in the Game: Save a Life, a recruitment program organized by Be the Match and the Andy Talley Bone Marrow Foundation. The program recruits college athletes to join the bone marrow registry, and the WPI football team will be holding its third drive in four years on April 7 at the Fountain (with a rain location in the Campus Center). Since the team began holding drives, over 350 people have signed up. 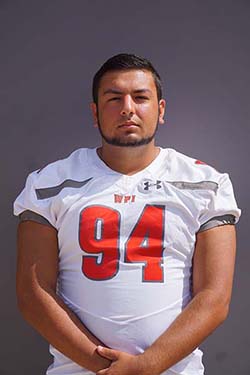 “Lots of my friends who are coaches at other schools have participated in the program for years, and we’re big on community service and doing things for others,” explains head coach Chris Robertson. “It was the right time for us to do it too … it’s a life-changing opportunity for our kids.”

Despite such high participation numbers, only one player had been contacted to receive further testing, but due to the rigorous donor requirements, he ultimately had not been selected as a match. As a recipient of the Get in the Game: Save a Life weekly newsletter, Robertson saw dozens of photos of players who had been named as matches and “... wondered if we’d ever have [a match] here at WPI.”

And then came Frank Almeida ’24.

Shortly after the 2021 drive, Almeida was contacted to come in for more testing as a potential bone marrow match. “I was excited, but also kind of shocked,” he says. “When I got the call, I hadn’t been on the registry for six months; my mom has been on the registry for years and never heard anything. In the back of my mind, I thought it’d be exciting to get a call, but I wasn’t expecting anything.”

Understandably, with that initial surprise came some anxiety leading up to the procedure, which was quelled by a pep talk from Robertson. “I reminded him about how we talk about being good members of the community and focus on giving to others,” Robertson says. “He has this one-in-a-million opportunity to truly be a real-life superhero.”

Everything moved quickly after that: Almeida had to have bloodwork done so the doctors could test it and confirm that it would be a match for the person receiving it; complete a physical and other testing at Dana-Farber Cancer Institute in Boston; and stop all exercise and heavy lifting a week before the procedure. With five days to go, he had to have four injections every day to put his bone marrow into what he describes as “stem cell–producing overdrive” to flush the stem cells into his bloodstream.

The day of the procedure, Almeida received his last round of injections, then spent four hours with needles in both arms, one taking the blood from one arm and running it through a machine for stem cells and plasma, one flowing the blood back into his other arm, all leading to his marrow being donated to someone in their mid-to-late fifties who was fighting leukemia right around Thanksgiving of 2021.

“Anybody might be able to be a hero …”
Almeida isn’t the only one on the team with connections to the bone marrow donor program: when he was young, Alex Gladu ’22 had been hospitalized for a month with aplastic anemia and needed a bone marrow donor. He and his family waited for weeks, but never found one. “For most biracial patients, it’s almost impossible to find a donor,” he says, explaining that no one in his family had been a match, not even his younger brothers. Gladu eventually ended up utilizing an alternative treatment and is now in remission, but his own experience made Almeida’s match that more meaningful.

“I was ecstatic,” he recalls upon learning that Almeida was a match. “I remember how difficult and stressful it was for my parents waiting to hear if they could find a match for me. I’m glad Frank stepped up; it’s not a surprise, given his character.”

Robertson agrees. “He’s a sweet, good, giving young man, and a great teammate,” he says of Almeida. “He’s just one of those people. It couldn’t have been a better person.”

While the drive itself may be straightforward enough, being chosen as a donor and going through the complete process can be nerve-wracking, to put it mildly—and no one knows that better than Almeida. However, he’s quick to add that even though the donor process put him face-to-face with his fear of needles, he knew it was something he had to do.

“There’s no real advice to give,” he says simply. “If you have this opportunity to do something so life-changing for somebody and help give them years added onto their life by doing this one small thing, I think you should do it,” he says. “You’ve really just got to suck it up and make it happen.”

“No matter how nervous you are, think of who the drive is for,” Gladu adds. “It could be anybody, and anybody might be able to be a hero, but you’ll never know if you don’t join the registry.”

The team is anticipating holding an outdoor event on April 7 where visitors can receive a swab kit to complete—that kit will then be sent to the registry. If the events of past years are any indication, the WPI community can expect a fun afternoon of information, support, and camaraderie. “We try to make it fun for everybody. It’s a very easy thing to do,” Robertson says, “and Frank’s match made us all know that what we’re doing is making a difference.”

Mark Your Calendars: Get in the Game and Save a Life 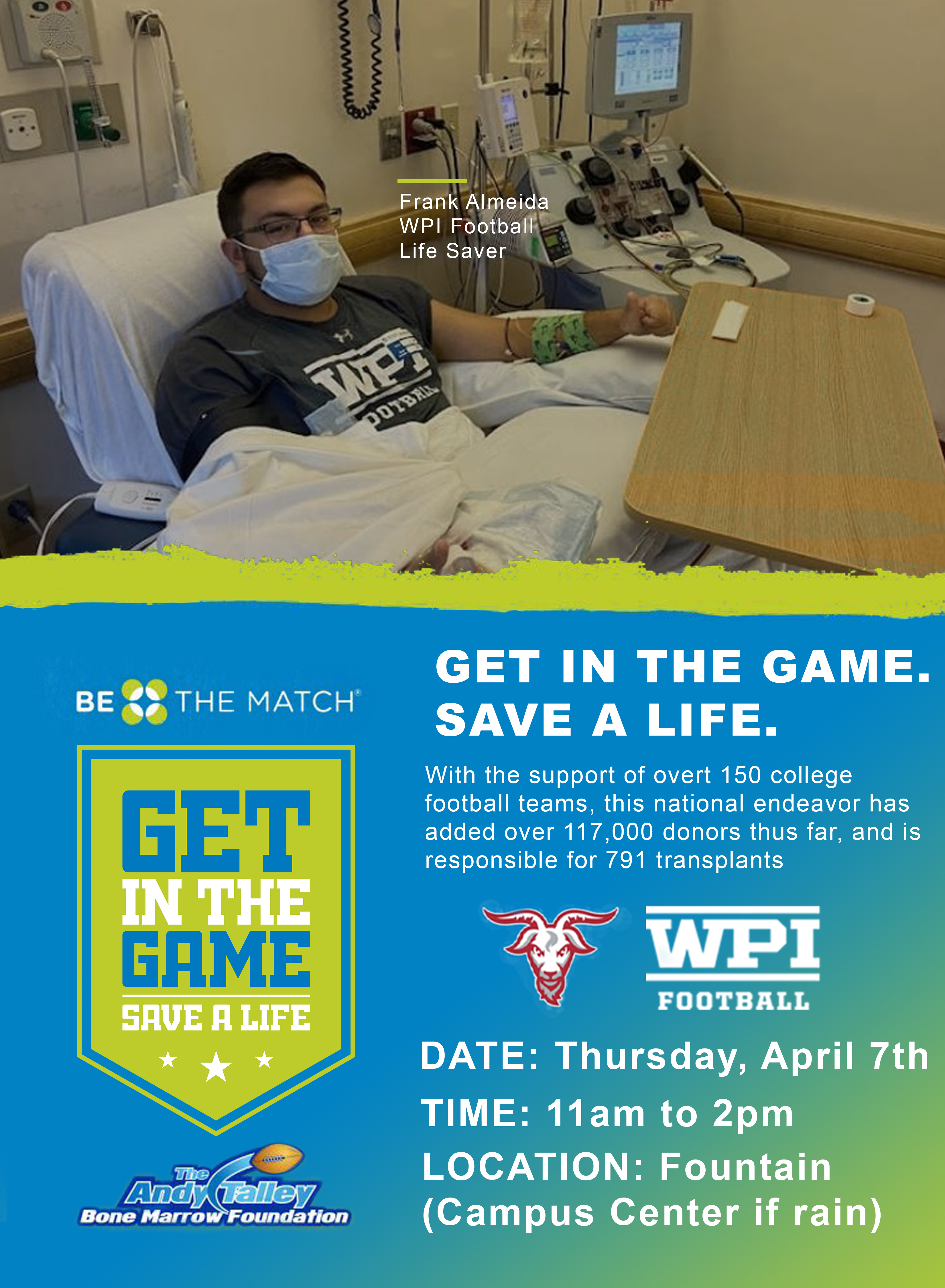 Start off the month by taking the opportunity to sign up for the WPI football team's third bone marrow donation drive. Join them and other members of the WPI community for an afternoon of camaraderie, support, and the potential to save a life.