In the picture on her lab Twitter account, WPI chemical engineering professor Amy Peterson looks ready to go to work with a 3-D printer at the Oak Ridge National Lab (ORNL) in Tennessee.

But this is no ordinary 3-D printer and the accompanying tweet suggests why.

“Today I went INSIDE a #3dprinter,” Peterson tweets. “My mind is blown. #lovemyjob #science #engineer”

That’s right—inside. While most 3-D printers are the size of a regular printer, maybe a bit bigger, the one at the ORNL is the size of a room.  It has been used to produce items such as the shell of a sports car and the 30-ft.-long hull of a submersible. It extrudes long layer after long layer of strong, heated polymer material, following schematics pumped in from a computer. 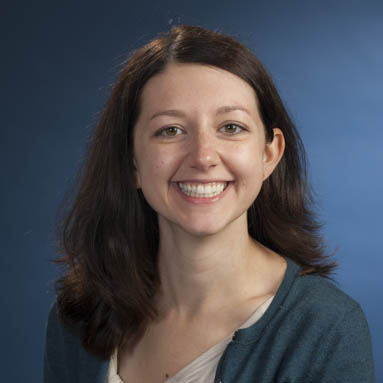 The printer is a key part of an exciting fabrication process known as Big Area Additive Manufacturing (BAAM), a development that can dramatically cut costs, time of fabrication, and waste for complex, larger projects that require a good deal of customization. BAAM is an important development in the area of additive manufacturing in which items are fabricated through addition instead of subtraction, as is the case in traditional manufacturing techniques.

With a team funded by the Office of Naval Research, Peterson is—as the photo suggests—in the middle of this exciting technique.

Since the summer, she and her team members have been focused on quality control of the BAAM process at Oak Ridge, using information on temperature and time from the printing process in developing models for optimal performance.

The models being developed by Peterson and her team members are meant to deal with the residual stresses that can result from the BAAM process. For the process to work well, each layer of molten polymer extruded by the 3-D printer must form a strong weld to the one beneath and the one above it, which are strongly dependent on temperature. Finding the right temperature gradients through a printed structure is important to prevent warping or delamination (a splitting apart of the structure between layers).

“What we hope to do with the thermal information is to improve the reliability of the process to ensure that if you’re going to be printing a 100-pound structure, that there will not be warping or delamination between the layers,” says Peterson.

“The welds between layers are the weakest part of a print,” she explains. “If you apply a load you thought was appropriate and you don’t have a good weld between the layers, your part will fail.”

“To be able to manufacture a single, large, complex piece is really exciting,” she says. “Significant material, energy, and time savings can be achieved.”

In 2015 ORNL reported that researchers had printed the shell of a Shelby Cobra sportscar as a demonstration project using the BAAM machine.

Also, the federal Office of Energy Efficiency and Renewable Energy reported that through a partnership between ORNL and the Navy’s Disruptive Technology Lab, researchers had created “the military’s first 3-D–printed submersible hull” using the BAAM system.

“To be able to manufacture a single, large, complex piece is really exciting. Significant material, energy, and time savings can be achieved.” -Amy Peterson

“The cost of a traditional hull ranges from $600,000 to $800,000 and typically takes 3-5 months to manufacture,” the report says. “Using BAAM reduced hull production costs by 90 percent and shortened production time to a matter of days—giving the Navy the opportunity to create ‘on demand’ vehicles while also saving time, money, and energy.”

Peterson says the BAAM process will not replace methods such as injection molding and blow molding for the manufacturing of large numbers of low-cost parts. But these methods can be expensive and time consuming when the job does not entail mass manufacturing.

For products that do not need mass production and require complex design, she explains, the BAAM process can work better than processes that create parts by using a mold.

Peterson says that the BAAM process would work well with composite tooling, and the process can also be used to fabricate modular building components.

The BAAM project she is working on fits well with her research interests, which focus on multilayer polymer composite assemblies with a particular focus on additive manufacturing.

“We are interested in tailoring properties and in understanding the relationships between interlayer polymer diffusion, interlayer adhesion, and residual thermal stress,” she states on her Chemical Engineering Department web page.

“In the area of additive manufacturing, my group has been studying the effect of assembly conditions on resulting physical and mechanical properties using both experimental and computational techniques,” she says.

She contacted researchers involved in the BAAM project and one of them thought that her additive manufacturing efforts could be applied to the program.

Peterson, who received her PhD from Drexel University in 2011 and did two years of postdoctoral work at the Max Planck Institute of Colloids and Interfaces, teaches advanced chemical processes as well as graduate-level electives in polymer composites and polyelectrolytes and graduate-level reactor design.

“I am excited to be at WPI," she says on her web page. “I really enjoy mentoring students in the lab and in the classroom and I value the focus on project-based learning.”