The end of C-Term brought to a close one of the busiest terms for three pieces of equipment on campus. Although coffee machines were running on overtime as projects neared completion, the Additive Manufacturing machines in the Rapid Prototype Lab (also called the 3D printers) were churning out hundreds of pieces.

Erica Stults, an application scientist with Academic & Research Computing, runs the lab and says C-Term is especially busy for the printers as MQP schedules gear up for presentations. 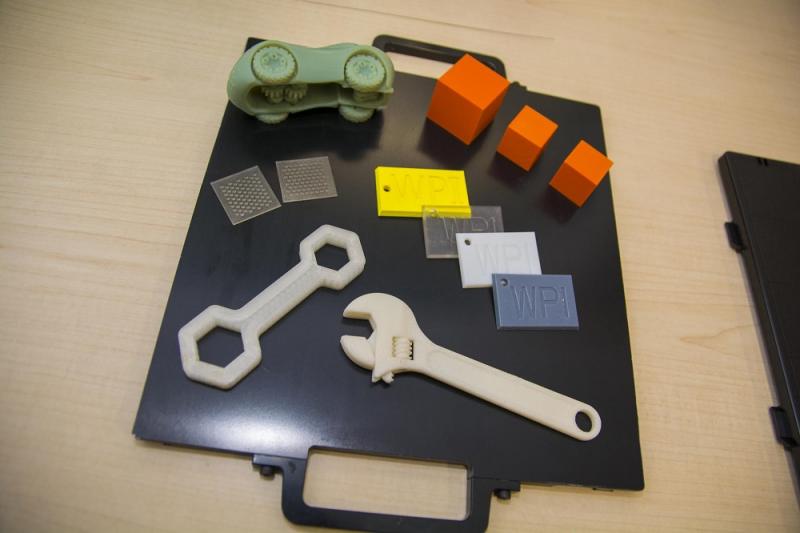 A handful of items created by the Additive Manufacturing
machines.

“These are used for all kinds of projects—MQPs, IQPs, independent study projects, grad research, coursework,” says Stults. “As long as there is a staff member or an advisor to approve the project, they can be used.”

The Rapid Prototype Lab in Higgins Laboratories holds the printers, all of which have distinct capabilities. And while there are other small-scale additive manufacturing printers around campus (including one for non-academic purposes in the CollabLab), these are the machines students and faculty use for most projects. The request is submitted with an STL CAD file that provides instructions to produce the exact tool or object being requested.

The largest and oldest machine, the Dimension, is also the workhorse of the bunch because of its flexibility. “It’s essentially a glue gun,” says Stults. At eight years old, the machine uses ABS plastic in an additive manufacturing process known as fused deposition modeling (FDM) to create something new. A blank tray is inserted into the 10x10x12-inch “printing envelope,” where spools of plastic are melted at high heat (280 degrees Celsius/536 degrees Fahrenheit) and passed through jets that follow the designated software pattern to place a horizontal first layer of supportive material and then an outline of the object.

Once that’s done, the jets build layers in an isotropic infill (zig-zag) pattern. Where an object has moveable parts, holes, or crevices, a support material is injected to make spaces. That material hardens during the process and is removed either by hand or by soaking in a tub of sodium hydroxide.

A smaller printer, the Objet, uses multiple materials and a slightly different printing process. “This one prints with liquid resin, which is cured with a UV light,” Stults says, noting the Objet’s printing materials are about four times more expensive than those used by the Dimension. The Objet can mix two materials at a time and can even use a biocompatible material. Because of this quality, the resulting texture can feel as different as flexible rubber or hard plastic.

So while both machines produce complex geometries, the Objet offers a process than can yield more refined results. Support material gives definition or creates needed separation, but the Objet’s support material has to be removed with a pressure washer. “You can print finer materials but it doesn’t mean the material will survive the pressure washing,” says Stults. 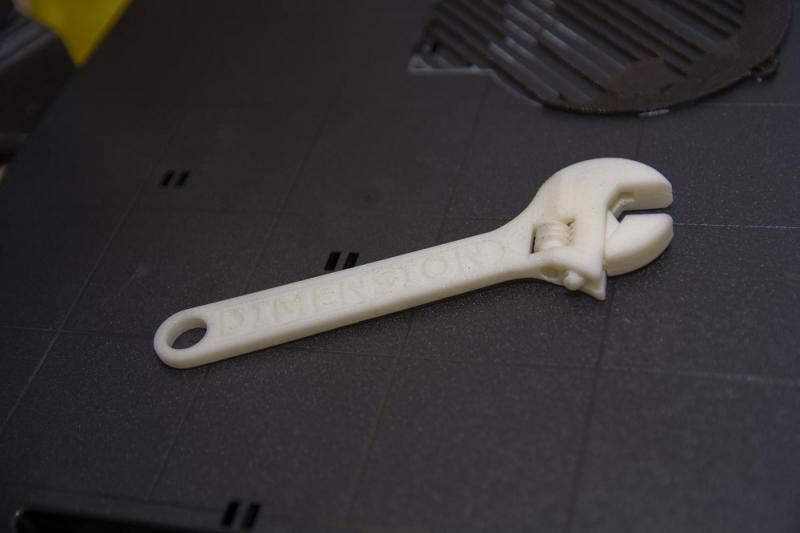 A wrench created by one of the machines.

The smallest and newest printer, the Mark 2, can churn out extra-strong materials, thanks to the continuous strands of Kevlar, fiberglass, or carbon fiber reinforcement that can be used. Similar to the Dimension, the object is printed in an outline and then two nozzles fill in with isotropic infill.

The printers require approval and there are certain guidelines for students, says Stults. Any request is thoroughly assessed, with Stults making sure the request is possible and that the machines are the best tool for whatever is needed.

“You can’t request something that can be made on campus,” says Stults, and the requests are for individual projects, not larger production runs. “Our machine shop is awesome and full service, but there are things we design that they can’t make there.”

The lab offers fast service, with a general three-day stretch (actual results are produced in a few hours to several days depending on the request volume and the individual requests) from request to printed object to ensure there’s time for printing, removing the support material, and drying. “I tell the students it’s rapid prototyping, not insta-prototyping,” says Stults, laughing.

Many colleges and universities have similar printers and services on campus and Stults says it’s a new normal that saves time and money in the long run, and encourages innovative thinking.

“These printers allow things to be made on site that previously we had to send off site or not do at all,” says Stults. And it saves frustration as well because the printers make intricate objects that can’t be made with other available materials and equipment. “It could derail a project if the students spent so much time on something that could not be made,” says Stults.

Stults, who earned her BS, MS, and PhD at WPI, has run the lab for seven years with her first introduction to them as a TA in the advanced CAD class she now teaches. And while the printers are often referred to as 3D printers, the name is not technically correct as that process uses powder and adhesive, she says.

She has seen all kinds of requests come through over the years, from the tiniest part to something that almost takes up the whole printing envelope space in the large Dimension printer (yes, one mold did feature a goat’s head and the WPI seal). And the printing requests aren’t strictly for engineering projects. The humanities use them as well—even once requesting a robotic drummer component for the music department.

And Stults is also available for questions and consultations to talk through potential projects. Some come to her and ask, “I need this to exist in the real world. How can I do that?”

Thanks to these printers, that’s easier than ever before.