Closing the 'Human IT Gap'

Suraj Patil ’19 (MS IT) discusses how WPI prepared him to manage projects and people. 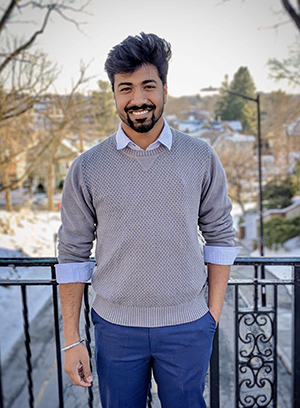 As a young boy growing up in India, Suraj Patil’s life changed forever when his father brought home the family’s first computer. Being a child, Suraj was mesmerized by the device’s interface, movement, and colors, and he wondered, “How are those things happening on the screen?” Always curious about how things work, this question would spark his future area of study and his journey in the U.S. and at WPI.

When it was time to pursue higher education, Suraj studied computer science at Savitribai Phule Pune University in Maharashtra, India. “At that point, [computer science] seemed like a natural area on which to focus,” he says. After graduating in 2016, he stayed in India and took a position as an associate software engineer at Xoriant, an IT and services company, where he worked as a server-side Java developer on scrum-based projects. Suraj excelled at his job, especially with technical feature additions and bug fixes, but he felt something was missing from his new career.

“I’m a self-proclaimed extrovert and I love making connections with people," he says. "The more time I spent on the purely technological aspects of my work, the more I became interested in how people would interact with the tools I was building—and leverage them to further their own projects. At the same time, I was seeing firsthand the disparity between certain technology tools businesses were implementing and the end user’s ability to fully adopt them. For years, this has been coined the ‘business-IT gap,’ but I started thinking of it as the ‘human-IT gap.’”

In 2017, Suraj made the decision to enter graduate school and he began his search for an institution. Although he was still based in India, he was open to studying anywhere in the world. After carefully considering several graduate schools, he chose to journey to the U.S. and attend The Business School at WPI to pursue his MS in Information Technology. “I was especially drawn to [The Business School] for its focus on management through a technical lens," he says. "The other business school IT/IS courses I considered were heavily technical. At WPI, I was able to further my technological knowledge and learn how to manage people and projects.”

“The other business school IT/IS courses I considered were heavily technical. At WPI, I was able to further my technological knowledge and learn how to manage people and projects.” – Suraj Patil ’19 (MS IT)

While at WPI, Suraj embraced the school’s community spirit. “The people are really what make WPI. Since there are students from all over the world, you’re exposed to so many different points of view; that’s an invaluable experience—both for yourself and your career.” He also established a rapport with the faculty and staff of The Business School and greatly appreciated their support and mentorship.

Suraj also had the opportunity to gain real-world experience while pursuing his master’s degree. During his second year at WPI, he enrolled in a co-op at Savant Systems, a home automation company. In his role as a software analyst, he worked with cross-functional teams to ensure that new features were rolled out efficiently, while forecasting any potential risks to project timelines.

While completing his degree at WPI and balancing working at his co-op, he began pursuing an opportunity at Dell Technologies in Massachusetts. In January 2019, he received exciting news—he had secured a position as a software engineer II. Much to his liking, the new role was more collaborative and people-facing. During his first two years at Dell, he worked on multiple challenging projects, one of which was the migration of two major Dell EMC projects with over 42 teams to Jira; this also included roadmapping and managing the transition along with training the managers, scrum masters, and team members.

He credits WPI for helping him thrive in a complex business environment. “Even though my master’s is in IT, it feels like it was also in management … technical management. I’m now more adept at overseeing projects and working with people across the company.” In late 2021, after navigating a corporate restructuring, Suraj was promoted to Program Manager at Dell. In his elevated role, he’s able to continue working directly with people and play his part in closing the ‘human-IT gap.’

“Software or the product is not the ‘core’ of any industry," he says. "It’s the people around that product that keeps a business moving forward.”

“Suraj is a great example of the kind of students we have,” says Norm Wilkinson, executive director of business programs in The Business School and mentor to Suraj. “He was a technical professional who realized he wanted to play a more strategic, leadership role in the tech business space. He did his homework and found WPI was the perfect place for him.
Suraj took full advantage of his time on campus. He fully engaged with the WPI community; he sought out faculty across disciplines; he learned from his fellow students; and he leveraged the plethora of campus resources available to him, from career services, to advising, networking, and mentoring. His story is a blueprint for how to be a successful graduate student.”

Today, Suraj is paying it forward by connecting with newly admitted Business School students and advising them on classes to take and faculty to connect with; he also guides students from India on making the transition to attending a school in the U.S.

“I definitely want to continue to stay involved with The Business School," says Suraj, "and help other students have the same positive experience I did.”