Fathers and sons can share many bonds, but somehow the bond of a shared alma mater and collegiate legacy is especially cherished. David Bernier ’87 had a very positive experience at WPI. From earning a mechanical engineering/nuclear engineering degree and playing football during championship seasons to a meaningful Lambda Chi Alpha membership and the making of life-long friends, his four years on campus included all that is great about WPI. And although any father may want his son to have the same positive college experience he himself had, when it came time for David’s son Michael Bernier ’20 to consider colleges, David encouraged his son to cast a wide net and consider multiple schools. 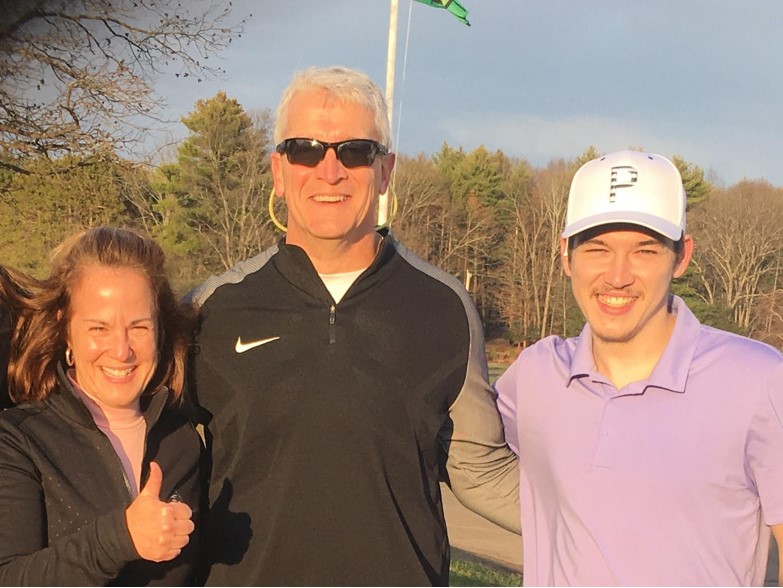 The father and son shared very different paths to WPI, but both left the school with knowledge, skill, and personal growth that would positively impact their lives. David was a first generation college student who wasn’t aware of WPI until the combination of his good grades, an interest in engineering, and an astute high school guidance counselor led the budding engineer to apply to the university. His interest in power and energy led to an ME/NE degree, and eventually led to his first job where he refueled nuclear submarines at the Portsmouth Naval Shipyard in Maine. Today, David serves as senior vice president, Power & Dams Business Line Leader for Stantec Consulting Services, Inc., one of the largest engineering consulting firms in the world.

David has maintained an active relationship with his alma mater and was especially pleased to be intimately reconnected with the school during his son’s time on campus. He recently shared, “WPI has been invaluable in both business and my personal life. The education I earned at WPI formed the basis of my career and professional successes, and after graduating, the network of alumni in industry became a tremendous asset to my career.”

As well as the impact on David’s professional life, the university has positively impacted his personal life. David shares freely the most important lesson he learned while attending WPI came from being a student athlete. “Although I only realized it later in life, I’ve come to understand the major role playing football at WPI has had in my life—relative to who I am as an individual and as an engineer and manager. The lesson of responsibility to your teammates (…the term can be exchanged with ‘spouse,’ ‘family,’ or ‘company,’ etc.) has been one of the fundamental building blocks in my life,” says David. And on an even more personal note, David built and maintains many relationships with his college peers, one of whom is godfather to his son, Mike.

Even in high school Mike Bernier knew he wanted to pursue a career in biotechnology, and as WPI had just invested in a new biotech facility at Gateway Park, WPI was added to the Bernier family college tour list. “I knew WPI was not Mike’s first choice school, but after touring the biotech facility, we were driving home and talking about the visit, and I said something about ‘…no matter where you decide to go.’ He stopped me and said, ‘I’ve made up my mind… I’m going to WPI.'"

“I would have been proud to have Mike go anywhere, but because of the opportunities that WPI brings, I couldn’t have been happier on his choice.” And now that he’s graduated, we have a special bond based around the school.”    - David Bernier ‘87

Like his father, Mike explains his WPI experience was key to helping him grow as a professional and a person. “I may not be the smartest kid out there, but WPI helped me learn how to work with others, problem solve under pressure, learn at a fast pace, and be a leader when needed. My Interactive Qualifying Project (IQP) and Major Qualifying Project (MQP) provided challenging problems to solve and were incredibly valuable experiences in preparing me for my career,” he says. Further, Mike explains he came to WPI with a lackluster ability to write, but as most projects required technical writing, he was able to work on and further refine his writing skills. Mike now writes protocols and other documents for clients which structure entire departments and are used to defend clients in audits. “I’m grateful for my WPI education, and I’m proud that I am using the theory and practice I gained at WPI to ensure product safety and quality compliance in the life sciences field; the impact of this type of work cannot be overstated,” he says.

Mike explains it feels special to share the WPI experience with his father. “I know my father was happy at WPI and really enjoyed getting to spend time there while I was at school. WPI gives us a strong sense of family pride, especially when we tease my sister and her husband who graduated from Georgia Tech. All in all, WPI was the best four years of my life thus far, and I was happy to make my father proud by graduating strongly from his, and now my, alma mater.”