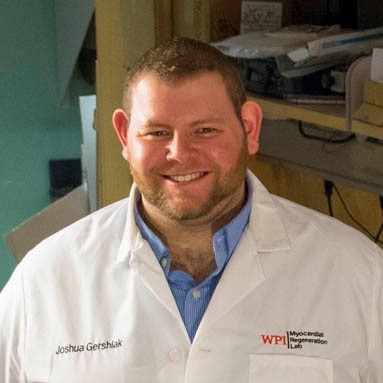 Josh Gershlak is a PhD candidate in Biomedical Engineering working in the Gaudette Lab. Prior to coming to WPI, Josh received a master’s degree from Tufts University and a bachelor’s degree from Case Western Reserve, both were in Biomedical Engineering. Josh was born and raised in Massachusetts, originally hailing from Peabody and has grown to really appreciate all that Worcester has to offer. His biggest passions growing up were to serve the community and to help those who were less fortunate. Originally, Josh sought to explore this passion by looking to become a medical doctor. However, it was through his time learning about biomedical engineering and tissue engineering that he found his true calling and an avenue to fulfill his passion.

During his time at WPI, he has undertaken many different innovative research projects aiming to engineer new tissues to be used in the heart. One of these project in particular has been featured in numerous media outlets worldwide for its groundbreaking exploration of the use of spinach leaves to act as the foundation for new engineered tissues. The importance of this project is that there is a major limitation in using engineered tissues from research labs in hospitals, as the tissue often lacks a proper vascular network. However, since spinach leaves utilize a similar vascular network to that of the human body and have the added benefit of being highly sustainable and available for a low cost, harnessing the natural vasculature has the potential to propel the field of tissue engineering into a new dimension. With this in mind, Josh is looking to engineer tissues that are larger, more adaptable and usable in a hospital setting.

Another cutting-edge project that Josh has been working on has been in conjunction with the Technion in Haifa, Israel. Josh explained, “A common problem in the heart is disruption in the electrical pathway that times the hearts overall function. When this disruption occurs, there could be improper heart rhythms that could lead to death of the patient. Me and my collaborators in Lior Gepstein’s lab at the Technion have been looking to engineer a biological solution to these electrical issues. I have combined the fibrin microthread technology, which has been a staple technology in the Gaudette and Pins labs at WPI, with engineered cells in the Gepstein lab. Through multiple trips to Israel, I have been able to show that these tissue engineered biofibers could conduction electricity over large distances and there are promising initial results from an animal model.” With these trips to Israel, Josh has gotten multiple unique experiences in an exciting and highly innovative country.