Jing Xiao, professor and head of the Department of Robotics Engineering, has been named recipient of the George Saridis Leadership Award by the IEEE Robotics and Automation Society for her leadership, service, dedication, and innovation in the robotics and automation community. 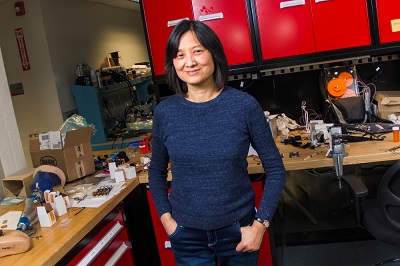 Xiao is one of three researchers recognized for leadership this year by the society, which is a part of the Institute of Electrical and Electronics Engineers, the world’s largest technical professional organization. She previously served on the society’s administrative committee, held the office of vice president for member activities, and helped lead society flagship conferences. In 2016, the society honored her with its Distinguished Service Award.

A member of the WPI faculty since 2018, Xiao led the transition of WPI’s Robotics Engineering Program to the nation’s first full-fledged robotics engineering department. She also has served as program director for the National Science Foundation’s (NSF) Robotics and Human Augmentation Program and is now site director of the NSF Industry/University Cooperative Research Center on Robots and Sensors for Human Well-being (ROSE-HUB) at WPI. Her research interests include robotics, haptics, multi-modal perception, and artificial intelligence.