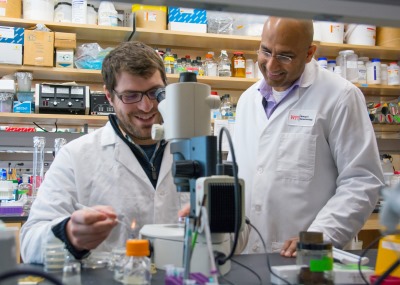 Chris Chute, left, and Jagan Srinivasan in the lab

While far simpler than the brains of higher organisms, the nervous system of the microscopic nematode Caenorhabditis elegans, or C. elegans, with its 302 neurons, has served as a useful model system for studying the biochemical underpinnings of behavior. Working in the laboratory of Jagan Srinivasan, PhD candidate Christopher Chute studies how C. elegans is able to respond to chemical cues in its environment (for example, avoiding a particular pheromone or hunting down food) and how these complex behaviors are encoded in the worms’ neural network.

Chris was recently co-first author of a paper in Nature Communications that described experiments aimed at unraveling the mechanisms behind predatory evasion evoked from olfaction. Conducted in partnership with colleagues at the Salk Institute and co-authored by Srinivasan, the study looked at the response of C. elegans when it was exposed to chemicals excreted by its natural predator. The worm exhibited an escape response, moving away from the chemicals and ceasing to lay eggs. The research team was able to isolate the repulsive molecules, called sulfolipids, and trace the way the chemicals activated four redundant neural circuits that are responsible for robust avoidance.

Interestingly, when the worms were soaked in a solution containing the anti-anxiety drug Zoloft, the aversive response declined, suggesting that some of the neural pathways upon which the drug acts to eliminate anxiety in mammals may have been preserved by evolution as remnants of fear-like avoidance behavior in prey. You can read more about the paper (“Predator-secreted sulfolipids induce defensive responses in C. elegans”) here