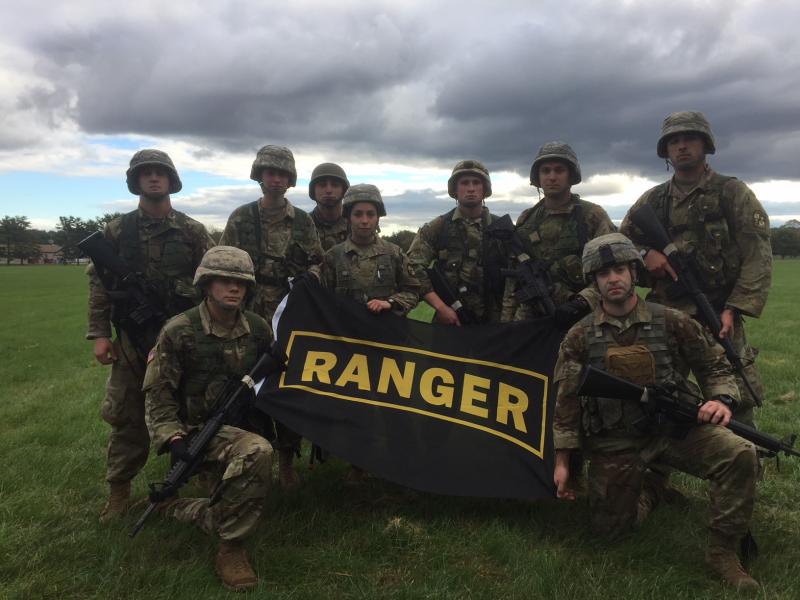 The Ranger Challenge is a three-day military tactics and physical endurance competition held each fall at multiple locations across the country.  275 Army ROTC programs compete as 9-person teams at one of eight locations, with the winners qualifying to compete at the international Sandhurst Competition, held annually at the United States Military Academy.  The 2nd Brigade (northeast region) Ranger Challenge competition was held from 19-21 October at Fort Dix, New Jersey. The Bay State Battalion Ranger Challenge team packed up their gear on Friday, October 19 for the weekend long event. The competition consisted of physical testing, road marches, land navigation, an obstacle course, combat casualty evaluation/evacuation, a one rope bridge crossing, weapons assembly and disassembly, and a hand grenade assault course.

Leading up to mid-October, the team trained 4-5 days a week. Preseason began in late August with long runs, ruck marches, and weight training. Training took place at both WPI and UMass Lowell, a satellite school for the Bay State Battalion.  The training leading up to the competition was “both physically and mentally challenging” says CDT Abigail Silbert (senior, Worcester State). The physical training was more intense than the routine company physical training. The cadets involved strived to achieve the highest standards and were constantly identifying new techniques to improve their training.

As the season progressed, the team added a technical part to their training. The technical training that accompanied the physical training included weapons assembly and disassembly, grenade tosses, and constructing a one rope bridge. CDT Hannah Matsas (freshman, Holy Cross) said that that she will “definitely use (the training) over my next four years in ROTC.”

Although the training for the competition consisted of long and difficult workouts, the team also found time to bond. CDT Ryan Camille (sophomore, Holy Cross) says that the “support from fellow teammates played a huge role in our team's performance. Knowing that your teammates had your back was a major confidence booster for all events.”

Both upperclassmen and underclassmen play a large role in the competition, as it is a requirement to have at least one person from each class represented on the nine person squad. As an underclassman, CDT John Morano (freshman, Holy Cross), feels he “will bring much (more) knowledge of the competition and much (more) heart to the team” in the coming years. As an upperclassman, CDT Benjamin Seitz (senior, WPI), a four year veteran of the Ranger Challenge team, says the “day to day grind, coupled with the always persistent adversity, has proven every year to serve as a catalyst” for the camaraderie formed between the cadets on the team. These bonds enable the cadets to push themselves to their limit for the sake of the team.

With the team’s preparation and tactful mindset going into the competition, they placed in the top half of the 44 teams that comprised ROTC’s 2nd Brigade (northeast region). As they begin to think about next year, the team met up after the competition to discuss ways to improve training and build on this year’s results as they prepare for Ranger Challenge 2019!