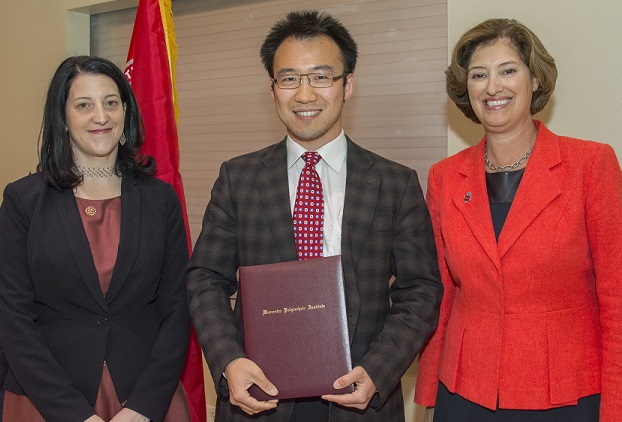 The Morgan Teaching and Learning Center, along with the Dean of Graduate Studies and Dean of Undergraduate Studies, were pleased to honor several graduate Teaching Assistants at the Faculty Awards Convocation on April 21. Tan (Tanek) Zhang received the TA of the Year Award for his tireless service to the students and faculty of the Department of Electrical and Computer Engineering. His citation read in part as follows:

"Several students and professors described Tanek as the best TA they have ever encountered, and as a person of discernment, intelligence, optimism, and humility. What sets him apart is his commitment and passion. Students reported that Tanek never showed them how to solve a problem or gave them an answer. He asked them questions to help guide them to a solution and gave them advice on how to approach new problems. He was especially well prepared to do this because he attended every lecture of the classes for which he was a TA. After every class, he makes himself available to talk with students and answer questions informally. Tanek’s advisor called this “a gift of love”, because it shows an incredible dedication to helping students learn.

Students described Tanek as a TA who was invested in their wellbeing. He sends daily emails of positive support and encouragement to his entire class, and he reminds them to take care of their health in addition to their studies. Students describe him as a role model, not only in terms of academics, but also in how to be proactive and live a balanced life.”

Alycia Abbott (Biomedical Engineering): for her level of responsiveness and initiative rarely seen in first year Teaching Assistants, and for being proactive in seeing needs for student support and stepping in to provide it;

Ahmedul Kabir (Computer Science): for his ability to communicate and connect with students in ways that create trust, collegiality, and mentorship;

Doug Reilly (Biology & Biotechnology): for his role in transforming the biology laboratory curriculum to include more authentic research experiences for students.

Congratulations and thank you to all of the TA award recipients!