It is with profound sadness that we announce the passing of Distinguished Professor Emeritus Arthur Gerstenfeld on January 19, 2022. He was 95. 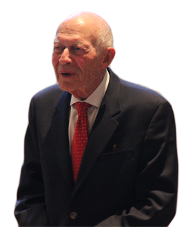 Art began his WPI career in 1978. Having earned his BME in Industrial Engineering from Rensselaer Polytechnic Institute, MS in Management from the Massachusetts Institute of Technology, and his PhD in Management also from the Massachusetts Institute of Technology, Art was well prepared for leading at WPI and in the Department of Management. He served as the first head of the Department of Management from 1978 through 1984. Art was the Founder of the MBA program, the Founder of the Namibia Project Center, and the Founder and Director of the Wall Street Project Center. In fact, the Art Gerstenfeld Endowed Fund for the WPI Wall Street Project Center was created in 2014 to honor Art’s long service and strengthen WPI’s presence within the financial sector.

Art was a noted researcher and author. He won substantial grant funding and led numerous applied research projects from the Department of Education, USAID, and NSF to name a few. He published 55 articles and authored nine books, one of which was translated into Japanese. Art held four patents for his work in Air Traffic Control Systems. He also served as a Manager at NASA’s Cape Canaveral (Cape Kennedy) in the early 1960s.

Given his many accolades and accomplishments, what many of us will most remember Art for was his teaching. Art taught courses in the Operations and Industrial Engineering discipline including Managing Technological Innovation and Production System Design. He also taught an interdisciplinary course in Finance and Technology as well as Entrepreneurship and Innovation. Art led PQP and MQP efforts in Namibia, London, New York, Costa Rica, Australia, Puerto Rico, and Washington, DC. His interdisciplinary seminars, Learning Language through Music and Exploring the World through Music, brought together his interests in music and technology. A trailblazer, Art was engaged in an Industrial Engineering project that sought to realize energy independence by 2015 through a focus on wind power.

While Art retired from active teaching, he never lost his connection with WPI or its students. He expressed sorrow over recent student suicides in conversations with Professor Michael Elmes. And at the beginning of January, he provided a graduate school letter of recommendation for a former student. Art’s love for WPI never disappeared.

Over a WPI career that spanned more than 40 years, Art left an indelible mark on WPI and what is now The Business School. A scholar, author, teacher, colleague, and friend, Art made better all who knew him and benefited from his leadership. He was a possibility thinker who truly embraced the notion that anything was possible, that life evolves, you do and learn new things all the time, and that we can live life to the fullest no matter what the circumstances. We are grateful that Professor Emeritus Arthur Gerstenfeld journeyed with us along the way and expect that his legacy will continue to illumine our paths.