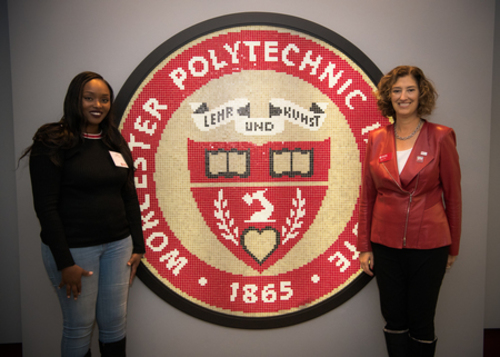 On October 27, 2018, Worcester Polytechnic Institute in Massachusetts unveiled an illuminated mosaic of the WPI seal in the entrance of the Gordon Library.

The mosaic was donated by the class of 2015 and dedicated in memory of classmate John Kamau Muthee, a third-year mechanical engineering student who died in September 2013.

Kamau took part in the school’s program for WPI first-year students called The Great Problems Seminar. Students work in teams to address a global challenge, and Kamau’s project, Clean Water to Prevent Pandemics in Rhumsiki, Cameroon, was one of the projects that have been published and shared with the world.

Friends of the Muthee family accompanied John’s sister, Julie Muthee, to the unveiling of the mosaic, which was also attended by WPI President Laurie Leshin and by many other alumni, staff, and well-wishers.

The mosaic was one of several gifts made by the class of 2015 in partnership with the family of Patrick Degenhardt ’17, including a scholarship in Patrick’s memory. The Degenhardt family was also present at the mosaic dedication, celebrating the life and memory of both their son and of John Muthee.

The mosaic, representing the WPI seal, was designed, created, and installed by the Boston firm, Artaic, known for their design and robotic construction of mosaics, with installations all over the world.