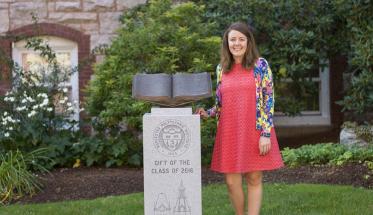 Philanthropy is a long-standing tradition at WPI; it has been entwined in its history since the Institute’s earliest days when John Boynton donated the funds and Stephen Salisbury II donated the land that gave WPI its start.

According to Tracy Baldelli, assistant director of annual giving in University Advancement, today’s students are eager to give back to their communities and their school. The annual Senior Class Gift campaign is one way their generosity has a direct impact on WPI and future generations. 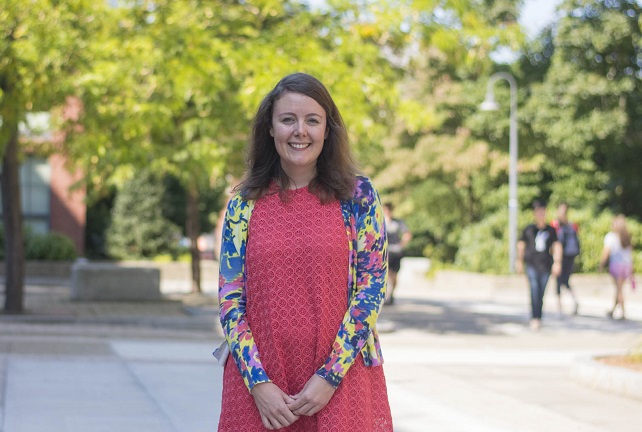 Since 1910, graduating classes have raised funds for lasting gifts to WPI. The results of their efforts are easily recognizable on campus. The Charging Goat (Class of 2013), the Quad-observing Proud Goat (Class of 2009), and the majestic beech tree (Class of 1943) are easy-to-spot reminders of the students who have called WPI home in different generations. Over Homecoming Weekend, the Class of 2016 unveiled their gift—a stone and bronze sculpture memorial honoring Dean William R. Grogan ‘46. Grogan helped create and tirelessly championed the WPI Plan, the Institute's legacy of project-based education that all students build their academic foundation upon today.

Located at the entrance to the Washburn Shops and Stoddard Laboratories, the memorial was created by sculptor Robert Shure of Skylight Studios (who also made the Charging Goat and the Proud Goat), and features a base with engravings of the two towers of Boynton Hall and the Washburn Shops, representing theory and practice. Resting on the base is a bronze book open to WPI’s principles of theory and practice.

The Senior Class Gift initiative is a yearlong process that involves fundraising and camaraderie. “The time and effort put in by each committee member reflects their continued success each year,” Baldelli says. Each year, the senior class is challenged to raise $10,000 from 40 percent of the class. In another example of a WPI tradition of philanthropy, trustee emeritus Win Priem ’59 and his wife, Susan, will match with a $10,000 gift. If the class reaches 50 percent participation, they contribute another $5,000. The Priems have committed to this for more than 15 years.

Encouraging this ambitious goal shows the students that giving to WPI is much more than just checking off a to-do box. Their gifts help other students and bring the class together to raise money and forge an identity, says Ryan Horton, who co-chaired of the Class of 2016 Senior Class Gift with Nino Melikidze. “I think it is important for students to give back to WPI primarily because of how much WPI gives to the students,” he says. “At the Institute, it is not just an education students are receiving; they are gaining valuable life experiences, making lifelong memories, building lasting friendships, and learning invaluable skills to succeed in their lives after graduation.”

Baldelli says WPI relies on the generosity of donors, but it’s more important that students become part of the long-standing tradition of philanthropy at WPI. “We are all about participation,” she says. “We are letting students know there are a lot of traditions at WPI and one important tradition is philanthropy. We want WPI to be a part of their philanthropic interests, as students and as alumni.”

But the reality is that college is expensive and college students tend to have less free cash. “There are students who will say, ‘I don’t have $100 to give,’” says Baldelli. “It’s just as important that we get to 50 percent participation of our classes. Give $5 if you can do that, and be part of this campaign and tradition.”

“I think it is important for students to give back to WPI primarily because of how much WPI gives to the students. At the Institute, it is not just an education students are receiving; they are gaining valuable life experiences, making lifelong memories, building lasting friendships, and learning invaluable skills to succeed in their lives after graduation.” -Ryan Horton '16

Each year, the campaign holds a special meaning for class members. The Class of 2015 raised funds to honor the memory of Patrick Degenhardt ’17, with an endowed scholarship. With class donations and a generous contribution from Patrick’s parents, Shelden and Cheryl Degenhardt, and his brother Adam ’15, they raised more than $50,000. The class also donated a mosaic of the WPI seal dedicated in memory of classmate John Kamau Muthee ’15.

The Class of 2017 had the most successful class gift campaign in WPI’s history, raising $22,000 from 55 percent of the class. The money will fund need-based Global Project Scholarships in support of President Leshin’s Global Projects for All initiative for students who want to have an off-campus project experience.

Reflecting a national trend, students are also shifting their philanthropy toward opportunities for students in the form of scholarships like the Global Project Scholarships, rather than toward physical items, says Baldelli. “Ninety-four percent of students here receive financial aid,” she says, and alumni funds support that aid. “Everyone can relate to an IQP and an IQP scholarship. When giving to an area such as scholarship or financial aid, students are helping the next generation of engineers and scientists, just as others have done before them.”

And while walking past a bench or a sculpture inspires a sense of pride and connection, establishing a campus-wide culture of philanthropy and those who directly benefit from donor generosity leaves a lasting impression that we are all responsible for supporting each other. When students fund scholarships, the committee co-chairs attend the annual Scholarship Dinner and meet the recipients to talk about how the money helped them, where they went, and what they did. They can communicate that information to the whole class and then everyone feels like a part of another student’s success and the legacy that their class has left on campus and the impact they continue to have.

Beginning the philanthropy process as a student makes the likelihood of donating after graduation much greater. “Starting to give back as a student begins a lifelong process due to the earlier realization of how important it is to give back,” says Horton. “As a student, you are able to see everything that the Institute has to offer because you experience it every day—the friends you interact with, the organizations you take part in, the classes you attend. All of which help build a better connection with WPI and really make students ask themselves, ‘What can I do for WPI, when WPI does so much for me?’”

The Class of 2018 is in the process of choosing class gift options. This year’s co-chairs, Reid Billings and Julie McLarnon, say updates will be posted as available.