Alexander Wyglinski, professor of electrical engineering and robotics engineering, is working to keep the increasing congestion on the wireless frequency spectrum from interfering with critical communications on the frequency used by first responders. ​

The fourth-generation of broadband cellular network technology, 4G LTE, is a highly popular wireless communications standard. Right now, LTE and P25 communication networks do not use the same range of frequency channels. However, as the wireless spectrum becomes increasingly congested, there is a need to rethink how wireless frequencies are used and how space on the spectrum is allocated. 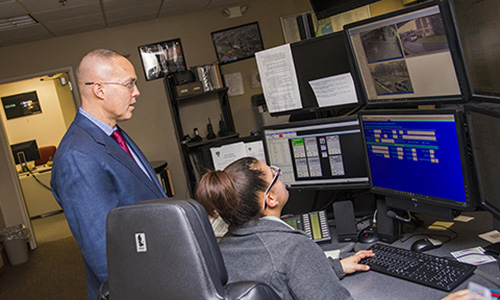 Wyglinski also will analyze any impact to the performance of the LTE system if it needs to co-exist with the P25 spectrum.

“In this project, we are looking at how LTE communications can be introduced into the same frequency channels that are being actively used by first responders,” said Wyglinski, who does on-going researchinto next-generation wireless connectivity. “This project will attempt to assess the impact of wireless interference of one communications technology on the other. The public safety communications being conducted over the P25 network could potentially be impaired or even jammed if the LTE signals are not configured correctly in nearby frequency channels.”

Wyglinski will conduct his research by using software defined radio (SDR) technology, which replaces traditional radio technology, like filters and amplifiers, with computer software. He will use the SDR technology to program radios to behave like LTE and P25 transmitters and receivers.  Then, using those programmable radios, he will test how the different systems interact with each other when they are operating on nearby frequency channels.

Wyglinski has one undergraduate student working on the project with him.