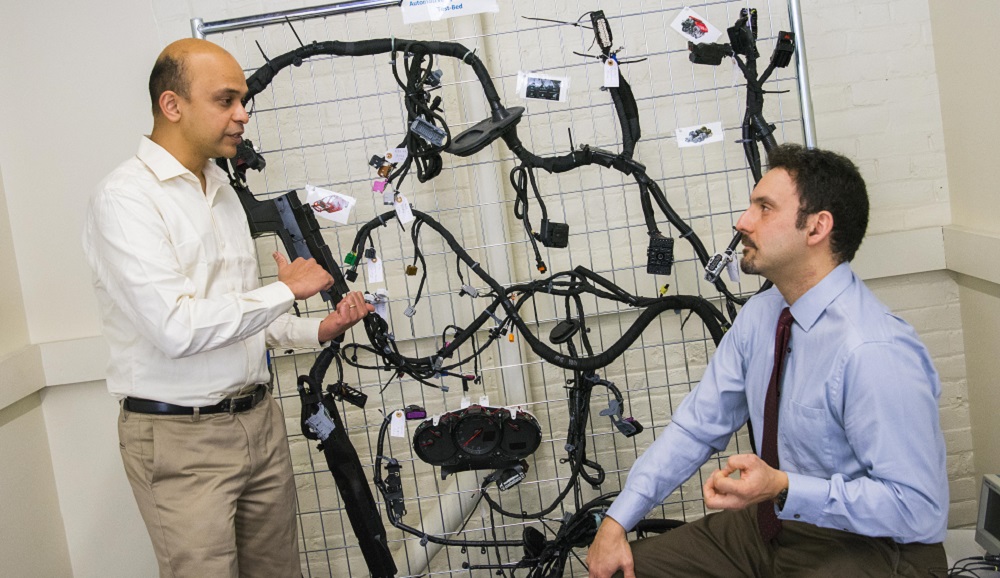 From their different areas of self-driving car research, Raghvendra Cowlagi (mechanical engineering) and Alex Wyglinski (electrical and computer engineering) have different points of view on how reliable those cars are. But they're working on an NSF-funded project that is bringing together Cowlagi’s study of decision making for autonomous cars and Wyglinski’s study of wireless communications to create a network of self-driving cars that can share information about everything from traffic congestion to icy road conditions and accidents snarling traffic ahead.

The two researchers want to enable self-driving cars to be more reliable and safer, whether they’re driving on a rural back road, on a busy city street, or in heavy traffic on a highway. The problem has been that researchers in their two different fields of study rarely communicate with, work with, or even talk with each other.

​​Co-PIs on the project, Cowlagi and Wyglinski are working to change all that.

Wyglinski, who is president of the IEEE Vehicular Technology Society, is trying to increase interest in uniting these two areas of research by helping coordinate the Connected and Automated Vehicles Summit in Santa Clara, Calif., today (Feb. 8). The summit, an industry-focused event, will bring together companies, like Nissan and Toyota, to focus on creating networks of autonomous cars.

While WPI has researchers working on other aspects of autonomy, (self-operating underwater vehicles, automotive cybersecurity, and self-driving controls), Cowlagi and Wyglinski’s team effort is taking them in a new, and largely unexplored, area.

What’s going on with these different research communities?

Wyglinski: The two communities never unified. We’re trying to bring them together as best as possible.

Cowlagi: Cars are becoming more autonomous, more independent of the driver. The fundamental assumption is you put a whole bunch of sensors—lidar, vision, radar—in the car so it doesn’t have to depend on anybody else to go where it needs to go. The car gets what it needs to learn about the world from these sensors. That is decision making. That is my community.

Wyglinski: My community says cars need to communicate with each other. How fast is that other car going? What traffic is another car seeing up ahead?

Cowlagi: There’s a disconnect. The community that works on decision making doesn’t think about using information that is wirelessly transmitted from other cars.

Will self-driving cars advance as much as they need to without being wirelessly connected?

Wyglinski: Oh, they won’t. Seriously. We’ve just hit a brick wall in terms of the reliability of autonomous vehicles. The advances might putt along, but it won’t pull off driving in Boston. With just radar, lidar, and sensors, it simply won’t work in Kelley Square here in Worcester. It won’t have the situational awareness it would need.

Would you ride in an autonomous car in downtown Boston at this point?

Wyglinski: I would not ride in a self-driving car in Boston without connectivity. Oh, no. Absolutely not. Until then, it’s just too dangerous. Maybe at 2:00 in the morning, but then it still might not find the I-90 on-ramp.

Cowlagi: Yes, I’d ride through Boston with one. Of course.

But isn’t this wireless connectivity critical?

Cowlagi: It’s not about whether it’s critical. It’s about what we can add to the existing technology by including communications. What we’re trying to do is make these cars more reliable and more safe. If communications can help do that—and I’m positive they can—we should use that.

"We’re connecting the automotive world. This is actually a collaboration between the vehicular society and the communication society." -Alexander Wyglinski

What challenges are you facing?

Wyglinski: This project really needs a reliable wireless link that can’t have almost any delay. No dropped packets and enough bandwidth to supply the needed information to the car. If you’re on a highway going 70 mph and there’s a car accident up ahead, you need that information without a hitch. This is about time-critical information.

Cowlagi: You’re driving and your car is trying to make decisions about where to go and how to not run into other cars and pedestrians. On top of that, you’re receiving information from other cars. Who you communicate with is extremely critical. There can be hundreds of these cars around but only a few of them will have relevant information to your immediate decision. What we’re trying to figure out is how do you come up with the relevant cars from the range of all the cars you can talk to?

How important is this aspect of your research?

Cowlagi: Selective listening is very important. Even if you could talk with all these hundreds of cars, it’s inefficient to process all of that data. Where would that kind of processing energy come from? If you could make do with information from five cars, instead of 100 different cars, then that would save processing energy. Of course, you could do this by brute force with a super computer but, on a car, you need to do this quickly in a smart and efficient way.

Wyglinski: This research is pretty distinctive in terms of wireless technology. How do you pan the area around you with a focused beam of wireless signals, both with listening and for transmitting?

Is your selective listening research unique?

Cowlagi - This is one of a kind. This is why we got funded. There’s nothing else that falls along these lines, at least for self-driving cars.

During the International Consumer Electronics Show last month, there was talk of a self-driving car network that would someday include city buses, bicyclists, and even pedestrians. Is that what you’re envisioning—and how difficult would that be to pull together?

Cowlagi: This does make our research more relevant because we are trying to identify the most important pieces of information that could be pulled in to help a car make better decisions. What do you do with this information to make your car more efficient and safer? What kind of software, algorithms, and hardware would you need? And, remember, talking to a pedestrian, hardware-wise, is much different from talking to a car.

How soon do you think we’ll have wirelessly networked autonomous cars on the road?

Cowlagi: I do see it being five to 10 years between now and when this architecture is so common.

Why is it important to work on the Connected and Automated Vehicles Summit?

Wyglinski: We’re connecting the automotive world. This is actually a collaboration between the vehicular society and the communication society.