A wireless, more powerful WARNER makes its debut at WPI 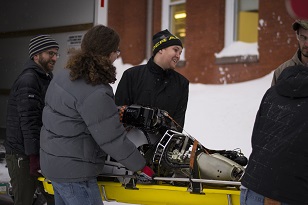 How do you improve upon a $2 million humanoid robot that can use tools, drive a car, and even perform karate stances? By unplugging it. That’s what Boston Dynamics did to its Atlas robot by overhauling 75 percent of the bot’s body to enable it to run smoothly and efficiently on battery power. On Monday, Feb. 9, the company returned WPI’s Atlas robot, named WARNER, after it underwent three months of upgrades.

WARNER (WPI’s Atlas Robot for Nonconventional Emergency Response) is the centerpiece of WPI’s entry into the DARPA Robotics Challenge (DRC), a competition aimed at creating a robot that can assist people in responding to disasters.

WPI-CMU, a joint team with members from WPI and Carnegie Mellon University, successfully completed the DRC Trials in December 2013, when WARNER took on tests such as turning on a fire hose, climbing a ladder, and driving a vehicle. Since then, the team has been busy preparing for the DCR Finals, taking place in Pomona, Calif., on June 5-6, 2015.

Everything from the lower legs up has actually been replaced. It’s really a whole new robot.
Matt DeDonato
team leader

DARPA has predictably cranked up the difficulty of the tasks the robots must perform at the Finals, where about 20 teams will compete for $3.5 million in prizes. Most notably, the robots can no longer be connected to power cords or wired communications tethers.

In response to the more stringent rules, Boston Dynamics built “Atlas Unplugged,” a new and improved version of the robot with several significant changes. WPI-CMU sent WARNER back to Boston Dynamics for upgrades in November 2014 and had been eagerly awaiting its return.

When WARNER finally made its debut at WPI on Monday afternoon—in the middle of snow storm no less—the team was able to see, and begin experimenting with, its many enhanced features.

“Everything from the lower legs up has actually been replaced,” says WPI-CMU team leader Matt DeDonato. “It’s really a whole new robot.” 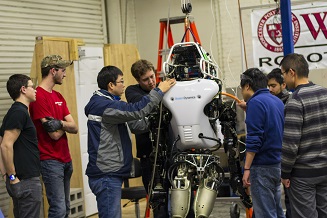 One of the most noticeable additions is the 3.7kWh lithium-ion battery pack strapped to WARNER’s back, which will enable the robot to run without a power cord for about 45 minutes. As DeDonato explains, while the battery would certainly come in handy during an authentic rescue operation, it presents challenges for the team.

“In a real disaster a battery would allow the robot to get around more easily and go into places it might not otherwise be able to reach,” says DeDonato. “However, during the finals, when we will have an hour to complete multiple tasks, we will need to be very careful about how we manage our time.”

To help the robot get the most use out of its battery, Boston Dynamics also installed a variable-pressure pump that allows for more efficient operation. 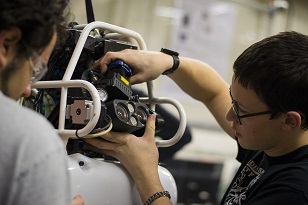 “With the pump, we can control the amount of power WARNER uses and apply strategic bursts for certain tasks,” says DeDonato. “The pump also makes WARNER a lot quieter!”

Another significant upgrade is the addition of onboard perception computers and a wireless router that will enable the team to control WARNER remotely.

“Going wireless is certainly more practical,” says DeDonato, “but it’s also a little bit tougher for us. Previously we were able to use a fast fiber cable, and now we’ll be relying on a wireless network that is about 20 times slower.”

On top of that, DARPA will periodically cut off wireless communication channels during the challenge to mimic real-life disaster situations, meaning that the robots must be able to carry on without direction from the team. 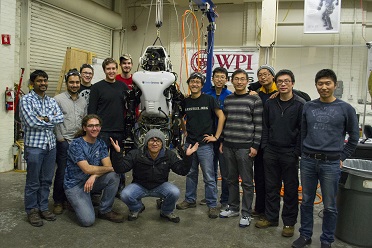 To tackle all of these issues, the team will spend the remaining few months doing what it does best—coding. DeDonato says that one of their first tasks will be to classify and code WARNER’s revamped joints, which include repositioned shoulders and arms that allow for increased workspace, re-sized actuators to give it greater strength, and the addition of an extra degree of freedom in the wrist to allow it to turn a door handle by rotating its wrist.

Team members will have an opportunity to put their work to the test on March 2, when they travel to South Carolina to spend a week running WARNER through a test course. However, as DeDonato notes, they must be prepared for anything.

“One of the biggest challenges at the finals will be a surprise task at the end,” says DeDonato. “Speculation ranges from finding leaky pipes to sorting objects into bins—but in reality it’s completely unknown.”