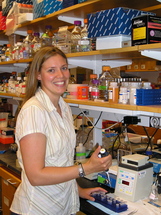 Natalie Farny,  who joined the Department of Biology and Biotechnology as an assistant teaching professor this fall, has co-authored an article with strong potential for our future ability to treat autism in Nature Medicine, the premier journal for biomedical research.

Farny, who is charged with teaching, advising, and overseeing projects, is co-author of “Genetic and acute CPEB1 depletion ameliorate fragile X pathophysiology.”  She received her PhD in cell and developmental biology in 2009 from Harvard.

During the four years she spent as a postdoctoral fellow in Joel Richter’s lab at UMass Medical School, she studied the effect of specific genes on protein synthesis in the brain as it relates to autism spectrum disorder.

The absence or mutation of the gene FMR1 is known to cause Fragile X Syndrome, or FXS, a form of autism and mental retardation that accounts for 3 to 10 percent of all diagnoses. Without a healthy FMR1, the brain makes too much protein.

Though variable from child to child, symptoms of FXS can include anxiety, diminished mental capacity, and seizures, as well as certain distinct autistic behaviors. It can be a devastating diagnosis for the children, as well as for the families who face it.

“The goal was to study new relationships between FXS and other genes we were working with at UMass,” says Farny, who received a fellowship from the FRAXA Research Foundation, a parent-run, nonprofit organization started in 1994 to support research.  In particular, she focused on the relationship between FMR1 and CPEB, another key gene relevant to autism spectrum disorders.

Whereas FMR1 diminishes the rate of protein synthesis in the brain, CPEB enhances it. By implication, brains without FMR1 that produce too much protein, as in Fragile X Syndrome, might be recalibrated by removing CPEB.

“If one is missing,” she says, “the idea is to get rid of the other one. It’s a question of balance. There is a sweet spot — if you go outside of that, you end up with autism.”

At UMass Medical School, Farny’s role was to demonstrate this relationship at the molecular level in the lab. But she was also involved in the behavioral studies conducted with mice.

“Once we could do it at the molecular level, we had to see if the mouse had cognitive improvement. There was some sign that working memory improved, that there was improvement in normal behavioral tasks.”

That improvement, if transmuted to the human brain, may indicate that researchers are on the way to finding a cure.

There are limitations, of course; genes cannot be mutated or deleted in human beings as they are in mice.

Moreover, “we’re assuming a lot by working with mice,” says Farny.  “How do we assess memory? Anxiety? You can’t ask a mouse how it’s feeling.”

However, the hope is that the research at UMass will result in the future development of a drug or drugs that could inhibit CPEB in people and thus redress the protein imbalance in the brain caused by the absence of FMR1.

And, given that many autism spectrum disorders involve either too much or too little protein, it is also possible that the findings involving Fragile X Syndrome might lead to further genetic solutions.

At WPI, Farny is teaching Anatomy and Physiology, Genetics, and an introductory course in human biology. She also plans to help with MQPs in the project lab, working with students on the relationship between FXS and other proteins.

Next year, she will help students make direct connections between intellectual curiosity and social responsibility, between science and humanity, by offering IQPs that focus on outreach and service in cooperation with FRAXA.

“Through projects,” she says, “we will help FRAXA in their quest to find cures for Fragile X Syndrome. I hope a lot of students will get involved.”