Think of it as a rite of STEM passage.

Every summer, Camp Reach welcomes a select group of rising seventh grade girls to campus for a comprehensive program focusing on discovery and hands-on engineering.

This year, the award-winning program is celebrating a milestone anniversary—20 years exposing young women to the myriad possibilities available to them in the science, technology, engineering, and mathematics disciplines.

“I learned that I could go out and become an engineer,” says Lizzy Fitch ’16, of Princeton, a former camper who now serves as program coordinator. “Camp Reach sparked my interest in the STEM fields and is what eventually helped me decide to attend WPI. It gave me the confidence to become a woman in STEM.”

Each year, 30 girls entering the 7th grade are chosen to attend Camp Reach, a two-week, selective residential program comprising of hands-on design activities and academic workshops. The camp will be held this year from July 24 to August 5.

With its proven track record, the program has earned significant distinctions; most notably, in 2011, President Barack Obama named it one of 17 recipients of the Presidential Award for Excellence in Science, Mathematics, and Engineering Mentoring. 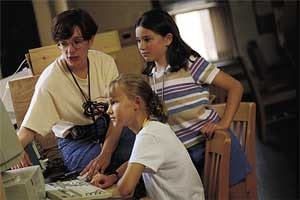 It continues its mission this year with an immersive program. As Fitch explained, the biggest element over the 14 days is an in-depth design project. Girls are split into three teams of 10, each group also comprising of a middle school teacher and teaching assistants. They are then given a problem to solve by a sponsoring local nonprofit—in the past, those have included Friendly House/Interfaith Hospitality Network and Regional Environmental Council (REC), among others.

After workshopping, brainstorming, designing, and tinkering, they then present their findings to the sponsors in a closing ceremony.

Fitch, who earned her BS in management engineering this year and is studying for her MS, recalls the particular gratification in that design project when she was a camper. “I thought it was great that we got to give back to the different nonprofit Worcester organizations while still learning about the engineering design process,” she says.

She was 12 when she participated in Camp Reach; she initially heard about it through her sixth grade math teacher and, as she puts it, “I immediately knew I had to apply.”

Meanwhile, Camp Reach also includes afternoon workshops focusing on different engineering principles day-to-day, Fitch says. And in the evenings? It’s time for a little bit of fun; the girls get to design their own dream shoes and newspaper dresses, à la “Project Runway.”

One of the most important elements, Fitch says, is that the young campers are exposed to influential females to look up to—most notably teaching assistants, or camp staff members who are in the 11th and 12th grades. “A large part of Camp Reach is providing the 30 campers with as many female role models as possible,” she explains.

Ultimately, she says, “I hope that the campers will gain confidence to pursue STEM-related careers in the future. I want them to understand that they can become engineers and scientists if they want to, and that they should be proud to be interested in science, technology, engineering, and math.”