The latest Institute of Industrial and Systems Engineering/Rockwell Undergraduate Student Simulation Competition brought quite a few firsts for WPI. It was the first time WPI placed in the global competition, and also the first time since 2011 that an American team has placed. And the fact that it was an all-female team is rare, if not a first, said the advisor of the second-place winning group, Industrial Engineering Assistant Professor Renata Konrad. 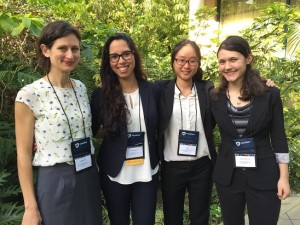 The WPI team went up against 72 teams from across the world and was one of only three to be selected to present their recommendations at the conference.

Elizabeth Karpinski, Camila Barros, and Lin Jiang—all rising seniors and industrial engineering majors—took on the challenge of solving the real-world supply-chain problem. To do that, competitors analyzed information concerning duck farms—more than 250 different farms, to be exact—thousands of possible routes connecting them, and five years’ worth of data considerations concerning demand, profit, costs, and more.

The students produced all kinds of interesting graphs and analysis, and knew what is important to present and how to present it.
Renata Konrad
Assistant Professor

“The amount of work involved? It was just hours and hours and hours,” says Konrad. Barros, she says, was in the midst of an internship at Tesla headquarters out in Palo Alto, Calif., which posed an additional long-distance collaboration challenge. But the students found a way.

“Sometimes they would divide and conquer,” depending on what they were working on, says Konrad. “It changed week to week.”

Competitors were tasked with building a simulation model over eight weeks—developing recommendations for what was an actual problem that the simulation company had engineers working on seven days a week for five weeks’ time. The name of the company and identifying details were changed for the competition.

Building the model was an advanced lesson in computer programming, program logic, and design of experiments in a real-life applicable situation, Konrad says. The students had to give a technical overview and present their findings and recommendations on ways to change the supply chain and decrease costs, she says. Intense subject matter, even for Konrad.

“They had to apply basics, but they were teaching me things about modeling … and data management skills,” says Konrad. “I had to sit back and think, as well … definitely challenging.”

Konrad says that in many ways, the duck farm was unfamiliar territory for the three women: “There is a shortcoming in how to manage large data in our curriculum in terms of an engineering education. We touch upon it, but this is a heavy-data project. [The students] produced all kinds of interesting graphs and analysis, and knew what is important to present and how to present it.”

In addition to getting in touch with ways to handle large data, the simulation problem had many fluctuating variables, Konrad says, making finding a solution even more complex.

Issues regarding transportation are at play, to name just one, she says. “Ducks get ill, ducks die. Duck farms have diseases. There is a capacity consideration of a truck, and as ducks grow, moving them to different farms … they had to decide if they get more trucks or build more farms.” The connected variables change and, in turn, create another change with effects to consider, says Konrad.

The students got the emails that they would be traveling to California to compete in the finals on April 1. Each team received $1,250 for travel to the finals in Anaheim in May, along with a $2,500 prize. An additional $250 then goes to the team’s chapter, according to the competition website.

“They were very excited to go to Disneyland,” says Konrad.