Over the past six years, the BBC World television series Horizons has showcased inventions and innovators from all over the globe, including satellite software that tracks deforestation of the Amazon rainforest, self-healing pavement developed by researchers in Germany, and interviews with such tech pioneers as Bill Gates and Richard Branson. 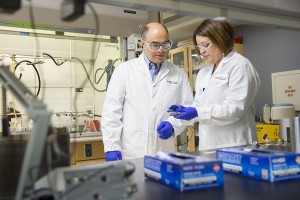 On Monday, Feb. 22, Horizonsadded WPI to its impressive roster when its crew stopped by to film a segment on research by WPI assistant professor of chemistry Marion Emmert.

Horizons host Adam Shaw, along with producer Steve Hobbes and assistant producer Rich Thompson, spent the morning filming in Emmert’s lab in Gateway Park. Over three hours, and multiple takes, Emmert walked Shaw through the process she and her students have developed for extracting rare earth metals from drive units and motors, a technology applicable to the recycling of electric cars, HD drives, and wind turbines.

As Emmert explained, the entire procedure—including shredding and demagnetizing the motors and separating the rare earth metals with a two-step chemical process—actually takes about two days. Shaw was able to try out each step using previously prepared solutions while he and Emmert discussed the science behind the processes. He also noted that WPI is one of the only places doing such research and had some fun testing out the strong magnetic properties of the demo motors. 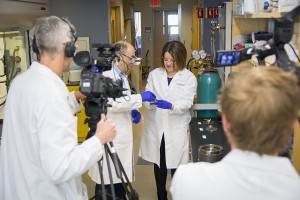 While the crew members took their time filming, often stopping to clarify technical information and capture shots from multiple angles, Shaw says that the final televised segment will only run about five minutes.

“This segment is part of an episode on the circular economy, the concept that products should be designed with secondary uses in mind,” says Shaw.

The episode will air as part of the seventh season of Horizons, beginning in May, and will feature additional segments on a start-up that turns used electric car batteries into power for schools in Africa, a social enterprise that has developed a modular smartphone, and a factory that produces reusable retail store coat hangers.

Shaw and Emmert enjoy a casual chat off camera. 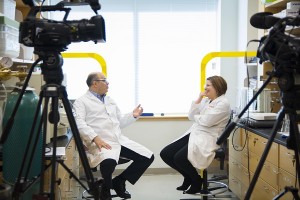 Shaw says that Horizons identifies its topics simply by searching the Internet for innovative ideas, and that his team is willing to travel far and wide to cover them. Before coming WPI, the team filmed a segment in New York, and had trips planned soon after to Canada, London, and Kenya.

“When you visit two or three locations in one day, you quickly get a vibe of the place,” says Shaw. “We were struck by two things at WPI: how friendly everyone is here, and the innovative spirit of the research that is taking place.”

He adds that he was particularly impressed with one aspect of Emmert’s research: its simplicity.

“What’s most impressive about this research is that it’s all about applying basic techniques to a new and interesting area,” says Shaw. “It shows that you don’t necessarily need a multibillion dollar research program that’s breaking new areas of knowledge to solve major societal problems.”

Emmert similarly hopes that Horizons viewers will see that basic science can make a huge impact, particularly for sustainability research.

“Hopefully, this clip can help generate awareness for the big challenge of materials sustainability that our technological societies are facing,” says Emmert. “I also hope that the fact that I am a female researcher might inspire other women to consider that they can make a difference in society with this career track.”

As for her future research, Emmert is already homing in on two related research projects, one on extracting rare earth metals from production wastes and another on separating individual rare earths, as most recovery processes produce a mixture of up to 16 of different metals.

She says that based on the filming experience, the Horizons team would be welcome to visit her again.

“I was surprised at how approachable the whole crew was. They were very pleasant to work with,” says Emmert. “I got the feeling from the crew that they enjoyed being here as much as we enjoyed shooting with them.”

Shaw concurs, adding, “Now that we know about all of the great research here, I doubt you’ll get rid of us. I’d really be shocked if we don’t come back.”