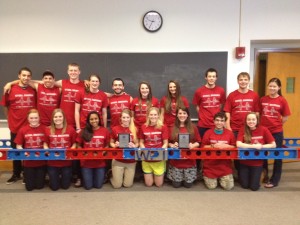 Not many people can construct a steel bridge with a 20-foot span in 7 minutes 30 seconds, but a team of WPI students did exactly that at the recent national Student Steel Bridge Competition, landing them 4th in the construction time category, 17th in economy, and 38th overall in a field of nearly 50 teams.

“This was really exciting,” says Sarah Cote ’14, past president of WPI’s American Society of Civil Engineers student club. “This was WPI’s first appearance at nationals and so we really focused on our build time. I’m really happy with our results and with the direction the ASCE club is going. This was truly a team effort.”

Their focus paid off in both the regional and national versions of the competition. Their fast assembly of the 1:10 scale model of the bridge placed them first in the construction speed category and third overall at the regional competition in April and launched them to the national competition, a first for a WPI team.

Held at the University of Akron in Ohio May 23–24, the national competition brings together the best teams in the nation. The competitions are sponsored by the ASCE and the American Institute of Steel Construction and invite members of teams from the student chapters and clubs of the ASCE to build a steel bridge model under very tight and exact specifications.

WPI’s ASCE student club started planning for this competition in September, says Wil Michalski ’15, the lead designer for the project. Although Michalski had been to regionals as a sophomore, he wanted WPI to get to nationals even knowing how difficult the challenge would be, given the strict requirements. “The toughest part of the design for the bridge was following the rules,” he says. “They are nitty-gritty rules, and they change every year.” One miscalculation and your team can be instantly disqualified, he says. 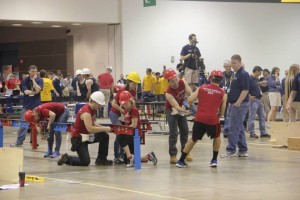 The bridges are judged on several categories, including display, construction speed, weight, stiffness, construction economy, and structural efficiency.  Penalties are given for infractions like dropped items or if a team member steps out of bounds. “The judges watch like hawks,” says Michalski.

WPI has participated in regionals since 1993, and breaking into national competition is significant. “When I first joined the club there were only five to 10 people,” says Cote. Recent interest and attempts to attract more students led to a tenfold increase in club members. Out of 50 current ASCE club members, about 20 are active in the competitions, she says.

“It’s only going to get better from here,” says Cote. “It’s great to see how far we can go.”

With nearly 20 students on the project, the group divided into several teams. Some students designed and produced the required poster while others wrote and submitted the essay. A graphics team worked on T-shirts and logos while the design team conceptualized, and the build team assembled it at the competitions.

The team knew they had stiff competition from more seasoned groups. Team members concentrated their efforts on building the bridge as quickly and efficiently as possible. “The major feat was making a bridge that stood up and met all the requirements,” says Michalski. “Everything after that was just a plus.”

The teams start from nothing, using CAD to begin with drawings to build a bridge that Cote says has to be able to hold the weight of a car with only a 3-inch flex. With WPI’s seven-week terms leaving precious little time for practice, Michalski says the team squeezed in hours wherever they could. “All that practicing paid off,” he says. “It’s the reason we got fourth fastest in the country.”

The bridge will be on view at WPI’s Touch Tomorrow event on June 14.