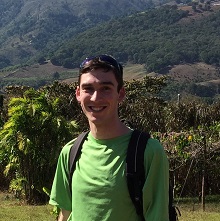 “The Goldwater Scholarship is a national competition,” says Letourneau, a junior from Dedham, Mass., putting him on a larger playing field than that of which he’s accustomed. The program—the premier undergraduate award of its type—fosters and encourages outstanding students to pursue careers in mathematics, the natural sciences, and engineering.

Letourneau is pursuing a biology and biotechnology major, and is naturally drawn to the challenges of this area of study.

“What is most exciting about biology as a whole is that we-don’t-know-why-this-happens moment,” says Letourneau, “when you are challenged as a researcher to figure out how to use existing lab techniques and build upon existing studies to figure it out.” He is now researching brain-behavior relationships in pollinating insects—such as bumblebees and monarch butterflies—with Professor Robert Gegear.

Since 2002, some 24 WPI students have been named Scholars or Honorable Mention recipients.

Research can combat many large-scale environmental issues, Letourneau notes. The research he does in Professor Reeta Rao’s microbiology lab, “has the potential to reveal how microorganisms infect their hosts and thereby lead to new, more effective therapies,” needed even more with growing antibiotic resistance, he says.

His professional goals include pursuing a PhD in microbiology, which will position him to teach as a professor at the university level and conduct research that focuses on mechanisms of pathogenesis, as principal investigator of his own laboratory. He intends to one day lead a research team in the study of virulence factors and methods of antibiotic resistance in bacteria. 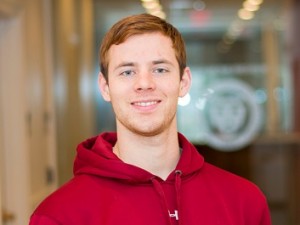 Clark, a sophomore from Attleboro, Mass., is a chemical engineering and electrical and computer engineering major. He is conducting research with Professor Amy Peterson on the relationships between physical and coulombic interactions between layers and macromolecular diffusion properties in polyelectrolyte multilayers that specifically contain PMAA, PAH, PSS, and PDADMAC. He maintains that these materials have the potential to be used as implant coatings for controlled delivery of biologically active compounds. He is researching a method to incorporate polyelectrolytes into redox battery membranes.

Clark says that all applications for the awards went first to Humanities and Arts Adjunct Professor Tina-Marie Ranalli. “She picked the three or four she deemed ready to enter,” he says. “I knew I was chosen a week after B-Term ended, and spent much of winter break on the essay and working on the nitty-gritty of the national application,” before submitting it in January, he says.

His professional goals include conducting research on materials for energy production and teaching at the university level. He hopes to become the lead researcher of a chemical engineering or materials science laboratory at a university with a focus on integrating novel materials into energy systems. Clark also wants to serve as an advisor for a student chapter of Engineers Without Borders or a similar club that engages with sustainable engineering projects.

Goldwater Scholars were selected on their academic merit from a field of 1,150 mathematics, science, and engineering students representing 415 U.S. institutions of higher learning. The trustees plan to award about 260 scholarships for the 2017–18 academic year. More information on the Goldwater Foundation and scholarship can be found here.