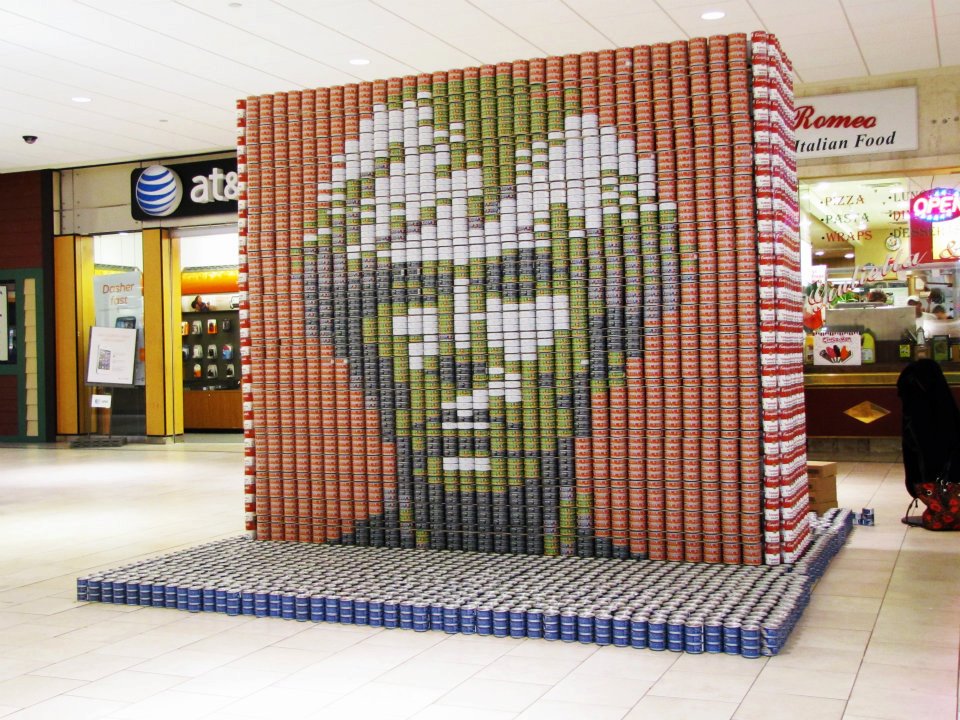 In early April, 10 WPI students from the Civil and Environmental Engineering Department will transform 150 cans of mushrooms, 360 cans of creamed corn, 8,300 cans of tuna, and 3,650 cans of beans (half black beans, half garbanzos) into a replica of the swooping lines of the Galaxy Soho shopping center in Beijing.

It’s a project that found their faculty advisor, Aaron Sakulich, sitting in the canned food aisle at Shaw’s with a calculator and a pad of paper one morning before work a couple of months ago. He was doing a little comparison-shopping, evaluating the size, shape, and relative cost of different cans, but the store manager didn’t quite see it that way.

“He came up to me and wanted to know what I was doing,” says Sakulich.

It was, perhaps, an obvious question.

The scheme is part of Canstruction, an international charitable organization that sponsors competitions and events featuring all kinds of structures built from cans of food. After assembly, they’re put on display as art installations; when the display comes down, all food is donated to local food agencies.

The WPI students’ model will be part of a competition at the ASCE Structures Congress 2014, to be held in Boston April 3–5.  WPI’s Team Gompei will be going head-to-head with teams from Brown and Northeastern. Each group is allowed to build within a 10x10x8-ft. designated area. All cans used will eventually go to the Merrimack Valley Food Bank.

The idea for WPI’s involvement came from the president of Daniel O’Connell’s Sons, the architectural firm that designed Gateway Park as well as the new Faraday Street dorm. DOC offered a grant of $20,000 to WPI to sponsor a team. When CEE department head Tahar El-Korchi sent out a feeler to see if anyone was interested, Sakulich jumped at the chance.

“I looked at the [Canstruction] website and saw a picture of an octopus attacking an old-timey sailing ship,” he says. “I said, ‘I have to do this.’”

Within a day of sending an email out to students, El-Korchi had his team of 10, all majors in the department’s new architectural engineering program.

After a “lively email exchange” to decide what they should build, two students with expertise in architectural software put together a 3D model of the Galaxy Soho.  From there, the group decided on the sizes and shapes of the necessary cans to build it.

When the initial cost soared to $26,000, Sakulich found himself at the grocery store, figuring out how to replace 3,600 cans of chicken soup with less expensive cans of the same size.

He graded down to the beans, but the Philadelphia native also went with the Pennsylvania Dutchman brand mushrooms as “a point of personal pride,” he says. “I wanted to remind [the students] which commonwealth is the best commonwealth.”

Their original design will need to be modified before the actual installation: if built exactly to scale, it would be sixteen feet high and well over the limit.

Next week, the team will meet to make some critical decisions about alterations.  One option is to construct only the top half of the model. In the worst case, Sakulich says, they will create a mosaic with the different colors of cans in a shape that roughly corresponds to the original.

As for their chances against the other two teams?

“We’re going to crush them,” he says. “If not in style, then at least by weight.”