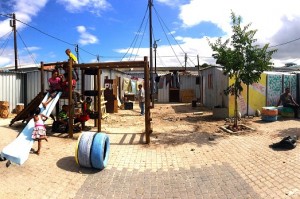 Seven weeks isn’t a long time, but WPI students know they can do enough in that short span to change lives for the better.

We are excited to get together with people across these different worlds and get to know one another.
Scott Jiusto
Cape Town Project Centre Director

“These projects succeeded because the community took ownership and shared the responsibility with the city and its partners,” de Lille said in her remarks to the community members, city councilors, officials, and community partners in attendance. “I am pleased to know that the community of Flamingo Crescent has done the same, and I would like to thank you, and our partners, for your contribution in making this a success. By working together, we can make progress possible.”

Since the Cape Town Project Centre opened in 2007, WPI faculty and students have been working to build relationships and improve living conditions. According to IGSD associate professor Scott Jiusto, CTPC’s director, the latest projects have centered on collaborative efforts to create space for early childhood development (a preschool and a playground) while the informal community, also known as a shantytown, was being upgraded (called re-blocking) with water sanitation and electricity.

Using a shared action learning model, students and community members work closely. “It’s a way of thinking about the project,” says Jiusto. “We are excited to get together with people across these different worlds and get to know one another. We all have big hopes for what we’d like to have happen.”

Last fall, five juniors arrived in Cape Town ready to build on years of work, relationships, and even infrastructure established by other WPI students. When they left just before Christmas, the community had a new creche (preschool) and playground. 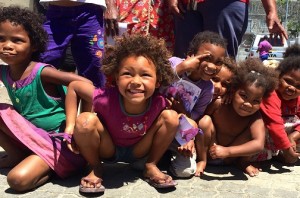 Justin Brousseau, a mechanical engineering major, says spending B-Term in Cape Town was life changing. “Our challenge was to allocate space for early childhood development,” says Brousseau, “and to communicate with community members about what they wanted [the project] to accomplish and who was going to fund it.”

Kristin Olson, a chemical engineering major, says the steps vary but the intent is the same. “They were all passionate about early childhood, but they needed a process to focus their efforts,” she says.

Coordinating and encouraging three disparate groups to fund the materials, labor, and project management helped the team move forward—one organization even hired community members to work. Acting as liaisons between the groups, as structure architects (with the final approval of an architect) and as community liaisons, the students were welcomed by the community. “They were excited and enthusiastic,” says Brousseau of residents. “Things like the electricity and toilets – they never had them. Compared to America, they are in some tough situations.”

Brousseau says the preschool, which will be known as Little Paradise Educare Centre, was especially needed in the community where many children have no community space to go while their parents work or search for work. Seeing groups of unsupervised, very young children was unsettling, and drove home what an important task the students had. “Now they would have a place to go to every day,” Brousseau says. 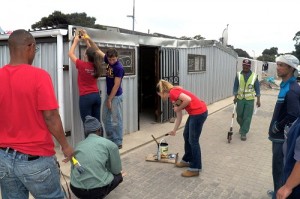 Olson likes the idea of building on efforts so that the process and any future work is sustainable. The students occasionally struggled with the laid back approach to work schedules in Cape Town, but their training kicked in. “What helped us was the sense of urgency lots of WPI students develop over a seven-week term,” says Olson. “We are very much like, ‘Let’s get this done.’ Bringing that attitude to a project helps.”

And while their physical efforts remain half a world away, the connections the students felt are long-lasting. “You miss the people you meet there,” says Brousseau. “You don’t anticipate the friendships you will form. They were so grateful, so kind. They didn’t have the education we had or the experience, but we learned so much from them. I don’t know if I’ll ever get an experience like that in my life again. I’ll never forget it.”

Olsen says her time in Cape Town set her sights forward. “When we got back to WPI after that experience, we could see where our efforts were going,” she says. “It gives you the drive to accomplish your studies so you can go out and do that in the future.”

Jiusto is already working with the next student group that will arrive in Cape Town next fall to continue the work of maintaining and managing the facilities and to use the work as a sustainable model for other re-blocking efforts.

“The fundamental basis for these projects is what happens between the students and community members,” says Jiusto. “They are exhibiting hope and strength in a difficult situation.” And even when the best efforts don’t work in the always changing informal community environment, the attempts count. “You have to have a willingness to try things that don’t work,” he says. “Because when they do work, it’s a source of pride and restores a sense of hope and promise.”