• To excel at actuarial mathematics—assessing the financial impact of risk—you need top math skills, problem-solving skills, and communication skills. A team of six WPI undergraduates proved they have what it takes by taking top honors at the 7th Annual Travelers Actuarial Case Competition in Hartford on Oct. 10. 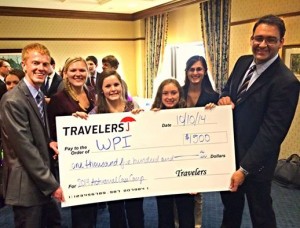 The daylong competition challenged teams from five colleges to solve a problem by analyzing data from Travelers commercial automobile business—premiums and claims over eight years split out by coverage, state, industry, and so on—and using that analysis to make business recommendations going forward, says Jon Abraham, professor of practice in Mathematical Sciences and coordinator of the program in Actuarial Mathematics, who selected and advised the WPI team.

“An advantage we had as a school was our ability to work well as a team,” says Lonergan. “The group work we find in most classes here at WPI was great preparation for a competition like this where teamwork was essential.”

Travelers invites four to six schools to the Hartford competition each year (there is a similar event held in Minnesota), based on where the company most often finds its top actuarial recruitment prospects. This year’s competition also included teams from Bentley University, Temple University, University of Connecticut, and Bryant University.

“Basically, they are saying, ‘Bring your best students and let’s see what you can do,’” says Abraham. “[Judging] is not just based on the final presentation but on how they work together and how they work the problem.”

The judges observe the students throughout the day, evaluating everything from their creative problem-solving skills and teamwork to how they communicate and present themselves, he adds.

“The WPI students are ahead of the game with problem solving and the ability to brainstorm creative ideas and think of a good solution,” says Abraham. But other schools’ teams have outshined them on presentation and interpersonal skills in past years, he says.

“The other schools that participate are more business-oriented. Those students are very polished and smooth. Our kids can [be like that], they just need practice,” he says. Events like the Actuarial Case Competition give WPI students the chance to hone their interpersonal skills.

“This year, they did a great job,” Abraham adds.

The teams did not know what the challenge would be until the event began. Then they were given far more data than they could process in the time allowed, including a few red herrings—data not pertinent to the problem, he says.

The WPI team chose to focus on just a few key areas of data, leaving aside a large piece of the information provided. When, at the end of the day, the head judge began by commenting that sometimes it’s best to narrow your focus rather than try to tackle all the data, Abraham knew the WPI team had won.

“I wish I could capture the look on their faces when the winner was announced, says Abraham. “[The realization that] we’re on that level. It was a breakthrough for all of them. It will carry through in their job hunt and in their careers to come”