As WPI celebrates its Sesquicentennial, the university received accolades and applause for its myriad contributions during Thursday’s meeting of the Chamber of Commerce Breakfast Club. 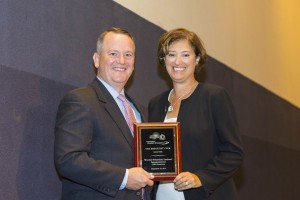 Sitting on the dais with eight other honorees, President Leshin listened as program emcee Troy Siebels, president and CEO of the Hanover Theatre for the Performing Arts, recited a condensed version of WPI’s history, marking significant milestones along the way, starting with John Boynton’s use of his life savings to provide a practical education to those who might not ordinarily attend college, and Ichabod Washburn’s donation of a working manufacturing shop where students could put what they learned in the classroom to work by making products for sale.

“Through that marriage of theory and practice, the founders of what was then known as the Worcester County Free Institute of Industrial Science forged a unique approach to technological higher education,” Siebels said.

He mentioned alum Robert Goddard’s first liquid-fuelled rocket launch and how WPI reinvented the concept of education to create the WPI Plan, a project-based approach to learning.

“Earlier this summer, Bite Force, a WPI-sponsored team won ABC’s BattleBots competition,” he said. “Led by WPI alum Paul Ventimiglia, the team took home the top prize beating out 24 others from around the world in the nationally televised show.” 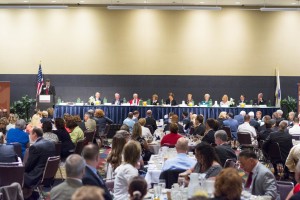 “Including one from MIT,” Leshin said in an audible stage whisper, eliciting laughter and some applause.

Siebels went on to note further WPI accomplishments, including those of former WPI chemical engineering professor Al Sacco, who flew aboard NASA’s Space Shuttle Columbia as a payload specialist, as well as research being conducted by mechanical engineering professor Diana Lados, which is producing new types metal alloys that can be used to make vehicles lighter and more fuel-efficient.

Following the program, Chamber president and former state lieutenant governor Timothy Murray said that WPI has been an important institution for the city and region for 150 years, “always being at the cutting edge on innovation and providing a first-class quality education.

“When you look at Worcester and this region’s growth, so much of it … is fueled by WPI grads and faculty.” said Murray. “And with the growing innovation economy in Central Mass. and in the Commonwealth, WPI’s more important than ever. We look forward to another 150 years of WPI leading the way.”

Others saluted by the Chamber: