“It’s good to be us right now,” said President Laurie Leshin as she reflected on the past year and shared plans for the future at the WPI Town Hall meeting on Sept 10. 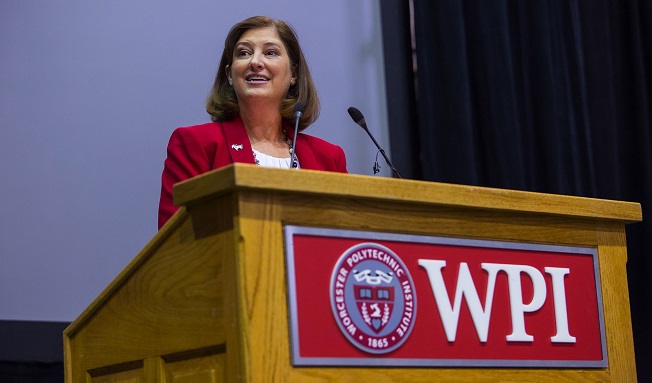 Held in the Rubin Campus Center Odeum, the annual meeting gave faculty and staff members a chance to hear about several recent university achievements and learn more about of the university’s strategic plan.

Leshin began the meeting by praising the newly arrived students in the class of 2019, selected from a record-high pool of over 10,000 applicants. Kristin Tichenor, senior vice president, also shared some impressive statistics about the class, noting that more than half its members had a high school GPA of 4.0, and 20 percent are first generation students.

Discussing other accomplishments from the past year, Leshin described how the university went above and beyond in its annual fundraising campaign, significantly increased its research funding, and achieved its best athletic season ever.

She also spoke about the just-released US News & World Report university rankings, in which WPI moved up an impressive 11 spots from last year to number 57, as well as rankings from College Factual that identified WPI as the 5th best engineering school in the nation.

Leshin credited the entire WPI community for helping to continually raise the caliber of the institution and attract top students, saying, “I really take it as a testament to every single person sitting in this room, from those of you who keep the campus looking gorgeous to those of you welcoming students through admissions and financial aid, to our career services … and all of our faculty who are so excited to welcome these students to campus.

“You are all the reason why we are able to say that we are a healthy, vibrant institution,” she said.

During the second half of the meeting, Leshin provided an update on WPI’s strategic plan, which entails three distinct but overlapping goals: to double-down on WPI’s distinctive undergraduate education, elevate research and graduate education, and enhance reputation and visibility.

“Over the summer, we moved from the ‘here’s some good ideas’ phase to the ‘here’s how we would actually go about doing some of these things phase,’” said Leshin.

In previewing the year ahead, she spoke about how the implementation of the plan will involve community members at all levels and in many forms, ranging from system-wide initiatives to one or two professors piloting a new course.

Leshin also noted that while the process will be exciting, it will entail a lot of unknowns and some risk taking—something WPI is well accustomed to.

“We’re going to try some things, and they might not all work. … In some cases we’re pushing ourselves, and that’s how this community operates. I’d rather do that than not,” said Leshin.

“These are places where we can push ourselves to stay ahead of challenges and leverage opportunities going forward,” she continued. “WPI takes pride in its history of doing that. The WPI Plan was absolutely an example of disruptive innovation in higher education, and this place led the way and is still leading the way in project-based education. … The fact that we have this ability to innovate and experiment is something that I really want to encourage.”