Class of 2016 told of inspirational graduates’ stories; advised to be ready to learn from failure and make the world a better place 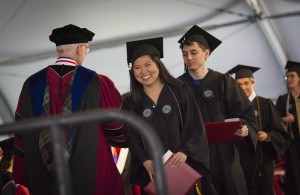 On Saturday, WPI awarded 908 bachelor’s degrees during the university’s 148th Commencement, and announced a new partnership with Girls Who Code to fund a scholarship program. The Commencement speakers elicited a theme of optimism, acknowledging some graduates who have overcome adversity, and advising the Class of 2016 that there will be setbacks along the way, but their best years are yet to come.

President Laurie Leshin cited a couple of graduates who overcame setbacks and personal tragedy to make it to the Commencement stage. First was WPI custodian Mike Vaudreuil, who lost his home and business during the Great Recession before taking a custodial job at the university in 2007. Vaudreuil took classes for years while working full time, and on Saturday received his bachelor’s in mechanical engineering at the age of 54.

And there is Syed Shehroz Hussain, known to friends and faculty as Ozzy, who received his bachelor’s degree in Electrical and Computer Engineering, four years after leaving his home in Pakistan. During his first year at WPI, his father was assassinated for trying to unite different religious sects and groups through a call for peace. For fear of his safety, Ozzy did not return home for his father’s funeral, and has not seen his family together in the same place in three years.
Ozzy has since transformed his grief into a message of peace, similar to his father’s. He speaks to student groups at WPI and across New England about the dangers of Islamophobia and the need for understanding and inclusion.
“So as we are celebrate your extraordinary achievements today, it might be tempting to brush aside all those things you have overcome to get here,” Leshin said. “I think you should honor the struggle as much as the ultimate achievement we applaud today.” 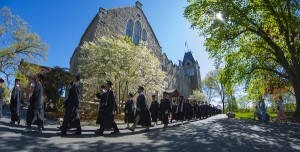 Leshin gave special thanks to outgoing Board of Trustees chairman Philip Ryan, who had served as interim president when she assumed the post in 2014. Ryan will transition to being a Trustee Emeritus and will be succeeded by board member Jack Mollen. “Speaking personally, I could not have asked for a better partner, mentor and boss in my first two years at WPI, and WPI could not ask for a more devoted supporter,” Leshin said of Ryan.
The 2016 Chairman’s Exemplary Faculty Prize, WPI’s highest honor for faculty achievement, was given to Wesley Mott, professor of literature in the Department of Humanities and Arts. Mott, a widely acclaimed scholar on the New England Transcendentalists, is the first faculty member in the humanities to win the $10,000 prize, which was established in 2007.

Leshin commended the graduates for their ability to make an impact, citing recent projects to develop a volunteer mentorship program in Morocco connecting students at Al Akhawayn University to children at a nearby orphanage, and working with the community of Windhoek, Namibia, to reduce the risk of home fires that devastate informal settlements there. 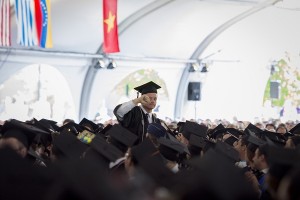 “These experiences have prepared you to translate your educational achievements to the real world,” she said. “…This year, about two weeks ago in fact, committed members of this class started Gompei’s Gears, WPI’s Bike Share project as part of their IQP. In the first week, more than 350 riders used the bikes! That’s what I call having an impact on our campus that will last long after you are gone.”

She told the graduates that their WPI education connects them to generations of earlier learners, thinkers, and doers who went on to become the inventors of the future in which the graduates now reside.

“Now, you have the opportunity, as they did, to shape the world for future generations,” she said.

“I challenge you to focus on the opportunities ahead, yes, but not to overlook the responsibilities ahead. With this education and your capabilities, we know you will do well in your career, and do well for your families. My charge to you, Class of 2016, is to also be sure to do good. For your community, for your nation, for the planet. Your WPI education has prepared you to make an impact on a much broader stage, and so, apply what you have learned here for good. In other words, use your WPI degree to make us proud.”
Leshin announced a new scholarship program with Girls Who Code, committing $100,000 to establish the WPI/GWC Alumni Scholarship. The first-of-its-kind scholarship program will offer each of five young women who have graduated from a Girls Who Code program $20,000 for each academic year of their four-year undergraduate studies at WPI. Girls Who Code is a nonprofit that educates and provides young women with the necessary computing skills to succeed and become leaders in the 21st Century.
Commencement speaker Reshma Saujani, founder and CEO of Girls Who Code, was awarded an Honorary Doctor of Science degree.

Saujani said that Leshin invited her to give the commencement address, asking her to talk about their shared mission to encourage more young women to pursue computer science-related studies and careers.

“Let me start by saying that I’m so proud of our partnership with WPI to offer scholarships to Girls Who Code alumnae,” Saujani said. “It’s a critical step in our mission to close the gender gap in technology, and I believe it will make a meaningful difference in getting more young women to study computer science.” 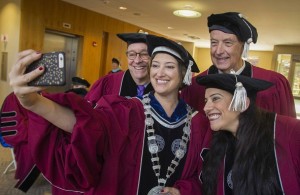 Saujani related how the Class of 2016 came to WPI to learn science and engineering with a social conscience, and in their time here, they have taken on projects and developed solutions to problems that lie at the intersection of science, technology, and pressing social and human needs.

She predicted that most of the graduates will change jobs several times in their lives. “Change is an opportunity — to try new things, to change your mind, to move up, down, and sideways in your career,” she said.

And she advised that some failures would occur in their careers, and that they should learn from those experiences and not allow fear of failure to block their growth. “No one’s real life looks the way it does on Instagram,” she said. “I believe that taking big risks can lead to a whole generation of young people who are willing to take big risks, crash, burn, get up and build a world we all want to live in.”

She concluded by thanking her own parents. “It may have taken me 20 years longer than they would have liked, but I accept this honorary degree in computer science in their honor. It’s because of their support and love that I’m here and working to solve this problem.”

Student speaker and biomedical engineering major Rebecca Stolarczyk of Sutton, Mass., took the podium, inviting her classmates to breathe a collective sigh of relief. “Years from now I will still remember the feeling of promise that A-Term held, the persistence of B-Term, the exhaustion of C-Term, and the sense of relief and accomplishment on the final day of D-Term,” she said. “This has been the cycle of our lives for the past four years, but now we find ourselves well prepared and ready on the verge of change.”
She said she was both humbled and overwhelmed by the sense of opportunity before herself and her fellow graduates—similar to the feeling she had four years ago when as a first-year student, she set foot on the campus early one August morning.

“In times of transition like these, on that morning four short years ago, and on this morning today in May, I find myself confronted with two very distinct realities,” she said. “The first, looming overhead in the hazy vision of the future, is the certain possibility of failure, the thing that we all too often let guide our decisions, making us doubt whether we are prepared for the challenges before us. Are we smart enough? Brave enough? Strong enough? Are we ready?”

She said that failure is inevitable, but cautioned her fellow graduates to remember that failure is necessary for progress, and cannot overshadow success if they do not allow it to.
“The notion that the best years of our lives are behind us is false, and propagated only by those who see new challenges as an opportunity for failure rather than success,” she said. “Certainly, many of us have experienced the best years of our lives so far here at WPI. I know I have.

“…There is no denying that these have been some of the best years of our lives, but certainly they will not end today, when we step foot off this campus as graduates of this great university we proudly call WPI. To each and every one of you, I wish that the best years of your lives exist as a continuation of your time spent at WPI.”