A Call To Service

With two words from Congressional Medal of Honor recipient retired Navy Captain Thomas Kelley, 27 new military officers joined the ranks of legions of men and women who devote their lives to service to their country. 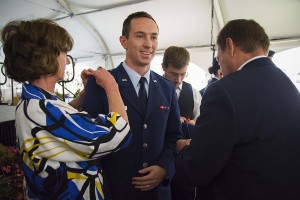 To applause and a standing ovation for the newly commissioned officers, Kelley, this year’s joint commissioning officer, gave a quick quip – “You’re in!”

Friday’s Worcester Consortium of Colleges Reserve Officer Training Corps Joint Commissioning Ceremony started with military precision at noon under the tent on the Quad. Families and friends watched the formal ceremony, with dual appreciation for the celebration and the weighty mantle the cadets are assuming.

I envy them. They have the best job in the world.
Thomas Kelley
Medal of Honor recipient, Commissioning Officer

The cadets, who came from WPI, UMass Lowell, Worcester State University, Fitchburg State University, and Holy Cross,  proceeded down the length of the tent to take their places at the stage, followed shortly thereafter by the  official party of WPI dignitaries, including President Laurie Leshin, and U.S. military officers. The cadets stood watch as the flags of  the Army, Air Force, and Navy and their country were presented, and Cadet Luis Blanchard presented the invocation. 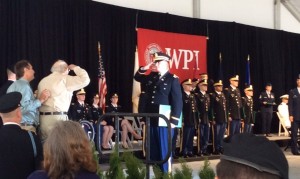 “A couple of days before graduation, two of his buddies disappeared,” DeRosa told the crowd of Kelley’s 1960 commencement at Holy Cross. “When he asked where they went, they told him they had gone downtown to sign up for Navy officer candidate school. The next day, he did the same. ‘Not through any glamorous or romantic vision of serving my country, but just because my two pals did,’ he would later recall.”

That spontaneous decision eventually brought Kelley to the Mekong Delta, where on June 15, 1969, he was leading a group of river boats that came under attack after one became disabled, said DeRosa. Kelley ordered the other boats to encircle the crippled boat and return fire.

“Then he maneuvered his own vessel directly in the line of fire to protect the troop carrier and the soldiers in it,” said DeRosa. “When Lt. Kelley was struck in the head and seriously wounded by shrapnel from an enemy rocket, he continued to relay orders to his men while lying the deck until the damaged boat was repaired and the troops it carried were out of harm’s way.”

Arriving to the podium to a standing ovation, Kelley reminded the new officers that in the midst of the celebrations and the next day’s commencement, they were to not forget their accomplishments were distinct. “You stand out from them because of the life of service which you chose four years ago is now becoming a reality,” he said.

And as Kelley acknowledged the “tough slog” of carrying a full load of courses while learning to become a soldier, he also recognized the parents and family members in the audience whom he thanked for giving up their children to the American people for a life of service. “It’s a hard choice with the uncertainty of what lies ahead,” he said. “But be assured that your country is grateful and will do all it can to give them the means to carry out their mission and come home safely.”

Kelley praised the new officers’ ambitions to become leaders in the military and to protect the citizens of this country, but cautioned that it is not something to be taken lightly. “You should feel humbled and fortunate that the American people have entrusted you with their greatest treasure—their daughters and sons,” Kelley said. “This is an awesome responsibility—please take it seriously.” 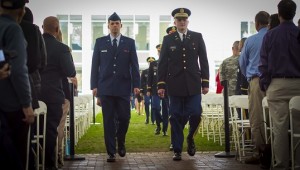 Giving advice from his perspective as a 30-year Navy veteran, Kelley reminded the young officers to listen to their NCOs and chiefs, to get to know their troops and listen to their stories, to insist that the NCOs stay close to the troops and lead them with compassion, fairness, and integrity. Get off social media for some face-to-face time, he said, and don’t forget to have some fun in life.

Kelley presented each new officer with their commissions, and they received congratulations from the officers and university officials on stage. An official pinning by family and friends followed taking the oath of office. And as the new officers received their first salutes, some from family members in the military, they continued a beloved centuries-old tradition of presenting a silver dollar to the officer who gives them their first salute.

DeRosa commended Kelley on his life of service.  “Captain Kelley is a leader in the truest sense of the word,” he says. “He leads by giving credit to others, acting courageously whether in combat or while standing for his convictions, and by leading a life of service.”

And although Kelley says he wants the new officers to remember to have fun and not take themselves too seriously, he knows first-hand that the uncertainty brings adventure as well as honor.

“I envy them,” Kelley said at the post-ceremony barbecue. “They have the best job in the world.”