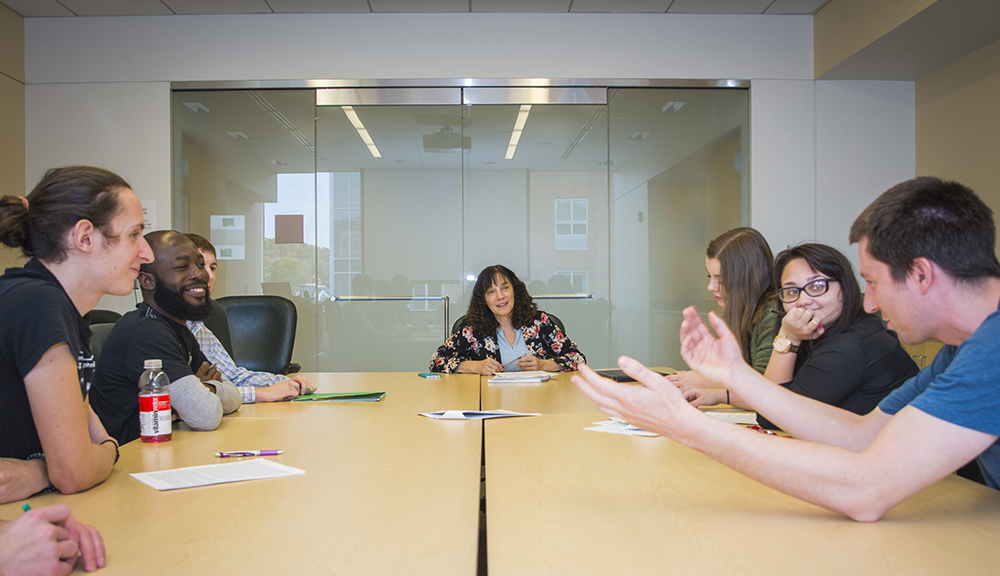 Cold Fusion in a Paper Cup? Not All News and Science Reports are to be Taken at Face Value

Suzanne Scarlata has taken a look at the country’s current political climate and has decided to teach a class that would help graduate students distinguish between legitimate, well-reported news stories and contrived spin presented as fact.

Scarlata, the inaugural Richard T. Whitcomb Professor of Biochemistry at WPI, says she wants students to use a critical eye in determining what to believe in daily news, and also in science.

“I want them to see the difference between Fox and the BBC,” she says. “And just because something’s published in a journal doesn’t mean it’s true. It might only work in one lab, right? And if something’s too good to be true, like water boiling at 105 degrees, it’s probably not.”

Students in Scarlata’s one-credit class take a look at some of history’s most well-known cases of scientific fakery to see whether the illegitimate findings were due to intentional data manipulation or falsification—people misinterpreting an observation—or whether a result achieved in one lab can be duplicated in another.

“Science is usually self-correcting,” she points out.

But, when false findings do find their way to publication and are taken as fact, especially in medical science, the repercussions can be devastating.

The anti-vax movement is a well-known example.

“It grew out of a poorly reviewed scientific paper that should not even have been published,” Scarlata says. “And then some Hollywood stars (Jenny McCarthy and others) got their hands on it and promoted it, and now people are endangering their children by not getting them vaccinated.”

About three quarters of class time has been spent going through these papers, with two students presenting a fake scientific topic each week. Cold fusion, a perfect example of something being too good to be true, is another example the students study. The scientists responsible for the bogus findings that reported a nuclear reaction at room temperature didn’t appear to intentionally falsify data, Scarlata explains.

“They got caught up in all this insanity. They were going to make all this money for their university. It only worked in their lab, but they didn’t care, they really believed it. They thought they were looking at something really fantastic, when it really wasn’t,” Scarlata says.

Scarlata arrived at WPI two years ago to fill an endowed chair after earning her doctorate at the University of Illinois at Urbana-Champaign, and working at AT&T Bell Laboratories before accepting academic positions at Cornell Medical School and then Stony Brook University.

In addition to looking at actual fake science, the students in Scarlata’s class have to write a fake scientific paper with fake co-authors and fake data, but with real references.

The students have already turned in their abstracts and are now working on their fake manuscripts.

“They’re having a ball with this,” she says.

One of the students is writing about how the ingredients in the fake cheese in Smartfood popcorn actually causes our adipocytes, or fat cells, to work harder, helping people lose weight.

The idea is for students to learn what data is needed and how to write a scientific paper, she says. They will then peer review the papers and do a peer review session, where they’ll have to go back and make revisions based on what information the reviewers wanted.

“They’ll learn what it takes to get published,” she says.

While fake news is being talked about nationally, it’s also been a growing concern in the scientific community.

“It happens more than you think,” Scarlata points out.

In the major journals, errors in the data are corrected, and Scarlata points out that sometimes there are about 20 corrections in all of the monthly editions.

This past spring, international scientific journals retracted more than 100 papers from China that were found to be fraudulent after it was found that a group of about 50 Chinese scientists had set up a whole team of fake peer reviewers to give thumbs up to non-validated data.

There are also some journals where the errors are sometimes never uncovered, Scarlata notes.

“Our lab here has had problems where we’ve sometimes tried to reproduce other people’s data and we can’t," she says. "You look at it carefully, and they’re just wrong.”

Sometimes she’s written to the authors, but has never gotten a response.

“You get frustrated, because you just spent so much time and money trying to reproduce this stuff,” she says.

"I’m hoping students will carry the message over to their family, their friends, even their hairdresser. Get people to understand that this science is real. This is what is keeping you healthy." -Suzanne Scarlata

The National Institutes of Health has done a lot to combat bad science, especially in the medical sciences, she says. However, this kind of vigilance takes funding to continue.

“This class is a real mixed bag of ethics lessons along with writing and discussion and analytics and critiques,” she explains.

And while the focus is clearly on science, Scarlata hopes some of the lessons will spill over and carry into students’ critical thinking about the news they hear every day.

When students presented the case of the link between electromagnetic waves and cancer—which, she says, was disproven in 2010—a student pointed out that Fox News still reports it as fact.

“I’m hoping students will carry the message over to their family, their friends, even their hairdresser. Get people to understand that this science is real. This is what is keeping you healthy, it’s what’s keeping your diabetes in check,” says Scarlata. “I’m kind of preaching to the choir in this class, but what I really want is for them to go out and talk about it.”