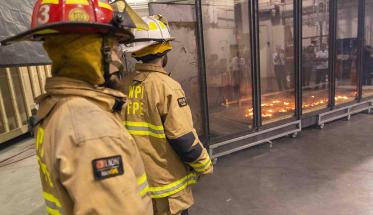 A crew of graduate students had the unique opportunity to work in one of the country’s few academic burn labs with former firefighter and WPI professor Albert Simeoni, conducting innovative research aimed at giving firefighters and land managers an edge in battling wildfires.

“I remember seeing over 50 fires burning in the mountains and thinking, ‘We have to do something about this problem,’” says Simeoni, who was once trapped in a dangerous wildfire himself. He was a firefighter for 10 years and assistant fire chief on the French island of Corsica in an area of repeated wildfires.

It was this experience that sparked his interest to better understand and study how wildfires spread, in hopes of helping firefighters improve techniques to control them, thus sparing lives, the environment, and damage to property.

On Sept. 27, the wind tunnel was put to the test , as researchers ignited a controlled wildfire in the tunnel on a 20-foot bed of dry pine needles—a common fuel for wildfires—and other debris he had gathered over the summer from the floor of a nearby forest. Lab director and volunteer Brookfield firefighter Ray Ranellone was in charge of safety during the burn.

The large fans in the back of the wind tunnel were turned on, simulating 2 mph natural wind conditions, and in a couple of minutes the flames had quickly spread across the material, illustrating how rapidly devastating wildfires can move, spreading to brush and trees. Footlong metal rods placed vertically inside the tunnel helped measure the height of the flames. A large, dark, metal hood above the tunnel captured much of the smoke. Data from the burn was sent to computers for processing by students.

“Fires start in the needles. It is the fuel,” Simeoni explains. “Even lightning has to reach the ground. This is the first stage of a wildfire.” Dry forest conditions hasten the fire’s spread, he points out.

“If we can remove some of the fuel, the fire is less likely to climb the trees,” Simeoni says. Moreover, if managers are able to control the severity of wildfires by limiting the damage to the top layer of the forest floor, life in the soil (including recycling nutrients) could be spared.

"In the whole country, there are not many labs able to do this. There are a few in the forest service and at some other U.S. universities." -- Albert Simeoni

“The first 5-to-10 inches [of soil] has the most life,” he says. “We know vegetation will still grow back even if the trees die, but if that part is totally burned and sterilized, it will not bounce back.”

The experiments will help Simeoni understand why wildfires happen, he says, to help design mitigation measures.

“Imagine these kinds of conditions and what happens to the soil,” he says. “It's how we measure the power of the fire. We can do it here in a controlled environment and look at the role of temperature and humidity. In the whole country, there are not many labs able to do this. There are a few in the forest service and at some other U.S. universities.”

Simeoni says the knowledge gained through the simulation can be applied anywhere in the country—Massachusetts, California, or on some military bases—to give those who fight and manage wildfires the tools to understand how wildfires “climb the fire ladder” from the ground to the tops of trees.

“The biggest impact these wildfires have is when homes are burning. Here, we are studying how houses burn. We want to understand how fire spreads. It starts small on the ground, not in treetops,” he says. “We can see how this happens in the tunnel and we can take the tunnel into the field to experience how real vegetation burns in the field.”

Simeoni plans to provide his findings to the U.S. Forest Service to give firefighters and managers better tools to fight the increasing number of devastating wildfires. The 40+ foot tunnel allows researchers to measure the spread and direction at different wind speeds. Pine needles are used as a fuel source in the wind tunnel. 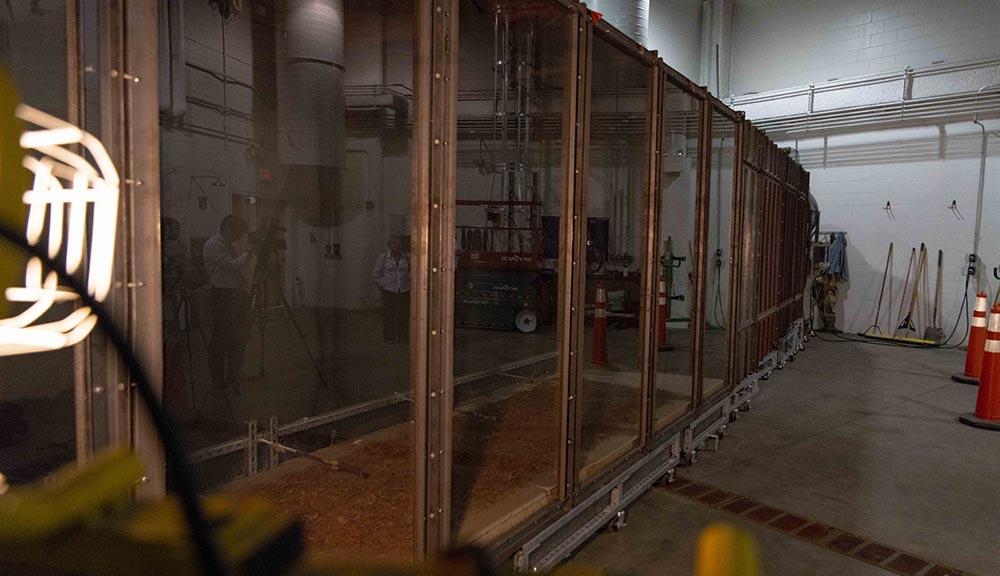 The wind tunnel is mobile and can be moved out of the lab for field testing. Two large fans, attached to the tunnel, can be programmed to change wind speed and direction.