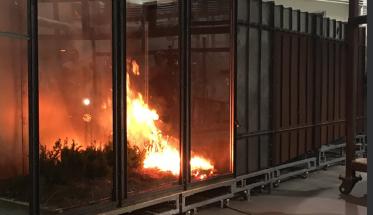 Researching the Risks and Realities of Wildfires

Internationally renowned expert on wildfires Albert Simeoni, a professor and the interim director of WPI's Fire Protection Engineering department, has been watching developments in Northern California where extreme fires have ravaged more than 200,000 acres, destroying nearly 6,000 structures and claiming more than 40 lives. It’s the type of tragedy Simeoni says faculty and students at WPI’s state-of-the-art fire lab have been studying to quantify the risks and find ways to help mitigate destruction.

Simeoni, a former firefighter in his native Corsica, returned to WPI this past July as a full professor after spending three years at the University of Edinburgh and in private industry. 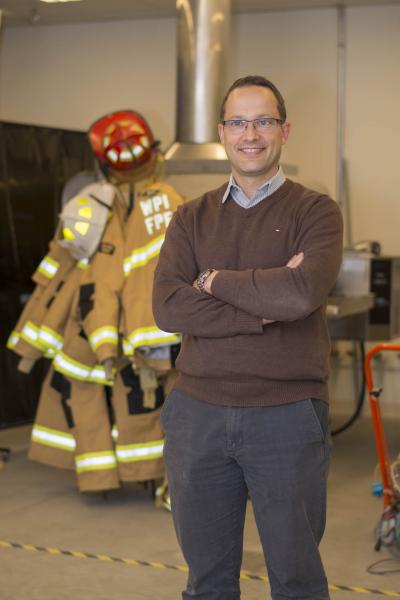 He recently spoke with The Daily Herd about wildfires.

Herd: What could we be doing to prevent these massive fires from burning out of control, and what guidelines would you offer for fighting them?

Simeoni: In a very simple way, there is nothing we can do to prevent all fires or all damages. Our firefighters are very good at their job and they have a lot of courage and dedication, but the fires we are seeing in California are so catastrophic that they are simply beyond our firefighting capabilities.

Instead, something very important we have to do—all of us—is to learn how to live with fires. We can mitigate some of the impact on human lives and on infrastructures and the environment, but it’s unrealistic to think that we will be able to stop all fires and to bring them under control.

Our research can help the first responders with understanding what happened in a fire—how it spread in a particular area, for example—so they can improve their tactics as to how they approach future fires. And importantly, we can work to make our structures and infrastructure more resilient to fire.

One problem with wildfires is that we, as a society, increase the stakes when we build so close to the wildlands and the forest. Also, for a long time the fire prevention policy was to extinguish all fires, not allowing for the natural fire gaps that are needed to keep large fires from spreading. And these intense fires happen all around the world.

Some fires in the Rockies release as much energy as several thermo-nuclear bombs. Right now Brazil is burning more than the U.S., but you don’t hear about it, in part because it isn’t as populated and people aren’t being affected as much. The more people, the more you hear about it and realize how devastating these fires are to human lives and property.

Herd: Does your own experience as a firefighter inform your positions?

Simeoni: Yes, a lot. I have always been attracted to firefighting, whether it was wildland, building fires, emergency medical support, whatever. I chose to focus on wildland fires, because I remember when I was maybe 15 years old my family was driving home from our summer cabin in the woods in Corsica—a region with a long history of wildland fires—in the course of a maybe one hour we passed more than 60 fires. My little sister was crying, and I was looking at that and thinking, "No, this is not possible, we cannot allow that!" When I started my PhD on wildland fire spread modeling, I wanted to have intimate knowledge of the phenomenon. Without hands-on experience, I was unable to do a good job at actually presenting it. So I did active firefighting for over 10 years in Corsica. When you’re a firefighter, you're always a firefighter—and that's what I keep in mind in all my research.

Herd: What kind of related research is going on in the Fire Lab?

Simeoni: Here at WPI we are using research and scientific tools to quantify the risk from these fires to help make communities more resilient to fire. It’s a problem of separation [between forest and structures], a problem of building materials, a problem of identifying and mitigating the different vulnerabilities we have in the built environment. Should we stop using wood to build? No, wood is a good material. But we have to design our structures and communities so that when a fire hits, we can minimize the damage as much as possible.

We have to look at the long term, and how we build at the interface with wildlands. It’s urban sprawl, actually, that is increasing the impact of these fires on us; it’s not climate change. Climate change is a worsening factor, but what's driving the change is urban sprawl.

Since the 1970s, the wildland interface—areas where structures are built close to, or within, natural terrain where high potential for wildland fire exists—has increased by 50 percent in the western part of the United States. I understand that it's very nice to have a house in the woods, but let’s understand the risks. And the best way to understand the risk is not to just say it’s risky, but to quantify the risk—which is exactly the research we are doing here.

To quantify the risk, we look at the source, which is the wildland fire, and the target, which is usually the houses, commercial buildings, and infrastructure like bridges and power lines, power converters. We look at how the fire is spreading from the source to the target, and then we examine the heat transfer from the fire front to a structure and how the fire will ignite. We look at how firebrands travel for igniting structures, and things like that. What we’ve seen in the California fires is the unbelievably quick spread of fires from structure to structure, in part because of the wind feeding the flames as well as blowing fire embers long distances.

WPI operates the biggest fire lab in academia. And we have a brand-new wind tunnel we built with the University of Notre Dame and the US Forest Service and tested this summer that we’re using in the lab and in the field to really understand the influence of wind on fires—something you’re seeing in the news now. The striking characteristic of our tunnel is that we can dismantle it and put it in the field to burn real vegetation. Because one of the problems we have when we go into the field to test is that wind is so unpredictable and uncontrolled tests would be dangerous. We now have well-controlled wind coming from our tunnel and that allows us to study the other aspects: What is the importance of the vegetation? What is the importance of the moisture content of the vegetation? What is the importance of the separation distance between the different plants? Things like that.

We need to think about what we can do to prepare for the next fire season and beyond. What can we do over the next five or 10 years to ensure that we are developing a way to live with fire? A natural fire regime can actually be very good for the ecosystem. The forest, with no fire, can die by itself; it can suffocate. The media can help us show people that we need to respect wildland fire and how it behaves. It’s really a reflection we have to have over the long term, and how we live with that.

During the summer, The Daily Herd is highlighting some of the past year’s favorite stories. Professor Simeoni also recently spoke to Newsweek for the article “California Wildfires: Elon Musk’s Flamethrower Toy Could Be a Problem.”