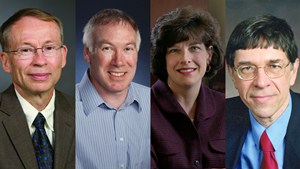 The tragic death of six Worcester firefighters in the December 1999 Worcester Cold Storage warehouse fire was eye-opening for researchers in the Electrical and Computer Engineering Department at Worcester Polytechnic Institute (WPI). The firefighters had gone into the windowless, mazelike building in pairs; the first pair became lost, the second tried to find them, and the third entered the building when the rescuers, themselves, became disoriented in the dense smoke. Other than their radios, they had no modern technology to guide them to a safe exit or to enable rescuers to find them. The WPI engineers believed technology could and should be developed to address this need, and they set out to create it.

Initially, the research the team, led by John Orr, David Cyganski, and James Duckworth, discovered that funding for this kind of research was difficult to find, so the early research and the development of simple laboratory prototypes was accomplished with internal funding. In 2004, with the aide of Congressman James McGovern, they won a major award from the U.S. Department of Justice, which allowed work to progress on a system that uses radio signals and advanced mathematics to pinpoint the location of a firefighter inside a building in three dimensions. Developing a working system was a daunting challenge, since radio signals bounce off surfaces inside buildings, making it difficult to tell where they originate. Steadily, with additional major federal awards, they developed and tested technology that brought them closer to the goal of locating firefighters to within a few feet. 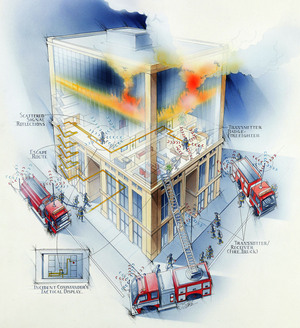 The system adds small transmitters to the firefighters' turnout gear and picks up the signals with antennae located outside the building. Sophisticated algorithms sort through the signals and reflections to determine which signals truly point to the transmitters' locations. The three-dimensional location information and the firefighters' paths are displayed on a console at the incident commander's station, making it possible to quickly direct firefighters to safety or guide a rescue team. Among the lessons the researchers have learned is that the challenge of indoor location is so great that no single location technology can be relied upon in all situations, and that the most reliable system will use more than one approach. Accordingly, inertial navigation has been added to the latest iterations of the WPI system design to improve its accuracy.

Throughout the development process, the WPI researchers worked closely with the Worcester Fire Department and other first responders to gain a clearer understanding of the nature of a firefighter's job and the realities of the fire service. They learned that technology for firefighters should, ideally, integrate seamlessly into equipment they already wear and use, and require no special set-up at the fire scene or preinstalled devices in buildings. And it should be rugged, light, and affordable. The WPI team has worked hard to meet these requirements. They have also worked closely and frequently with the Worcester Fire Department and the Massachusetts Firefighting Academy in Stow to test their technology under realistic conditions. 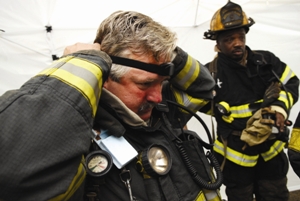 A Worcester firefighters puts on a wireless pulse
oximeter developed at WPI to continuously monitor
vital signs in real time.

From interactions with firefighters, the WPI researchers learned that stress-related heart attacks are the leading cause of firefighter fatalities. They decided to add to their location system technology for monitoring a firefighter's vital signs, work that was funded by a major award from the Department of Homeland Security. Among the technology they tested is a wireless, wearable pulse oximeter developed by Duckworth and Yitzhak Mendelson, associate professor of biomedical engineering. The sensor, designed to work reliably when worn by people engaged in strenuous physical activity, measures pulse, respiration rate, skin temperature, and blood oxygen saturation.

In 2009, with an award from the Federal Emergency Management Agency (FEMA), Cyganski and Duckworth, along with a research team from WPI's renowned Fire Protection Engineering Department, led by professor and department head Kathy Notarianni, set out to develop technology to address another threat that firefighters face: flashover, the moment when all combustible materials in a room simultaneously erupt in flames. A yearlong research and development effort, culminating in burn tests at the Massachusetts Firefighting Academy, produced a sensor that can accurately predict the onset of flashover up to a minute before it occurs. 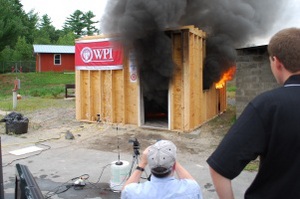 A test of the WPI-developed flashover prediction
device under way at the Massachusetts Firefighting
Academy in Stow, Mass.

Currently, Cyganski, Duckworth, and Notarianni are working on a new project, also funded by FEMA, that will produce a sensor that can detect the toxic gases carbon monoxide and hydrogen cyanide in and adjacent to the fire ground. The research responds to the growing realization that these odorless toxins, which are generated by burning materials, can pose significant immediate and long-term health threats to members of the fire service. Some of the work on this project will be conducted in the Fire Protection Engineering Laboratory in the newly opened Gateway II building on WPI's Gateway Park campus.

In addition to working on the flashover and gas detection technology, Notarianni has helped drive efforts aimed at addressing the needs of the fire service nationally. She helped lead a series of studies funded by the Department of Homeland Security (DHS), and conducted jointly with the Center for Public Safety Excellence, the International Association of Firefighters, and the National Institutes of Standards and Technology (NIST), that have helped set new standards for optimal crew size and resource management for fire department deployment to residential structure and high-rise buildings. The 2010 Springer book Quantitative Evaluation of Fire and EMS Mobilization Times grew from a study, sponsored by the National Fire Protection Association, conducted by Notarianni and a student. She has also worked with more than 400 fire departments to compile detailed demographics and build a database of hundreds of thousands of fire department deployments and outcomes, and in 2011 organized the National Fire Service Data Summit to pave the way for a national fire service data set. This research will help government agencies and local jurisdictions establish optimal resource allocation, and also save countless firefighter and civilian lives. Most recently, she advised an undergraduate project on the failure of firefighter facemasks that may lead to a federally funded study. 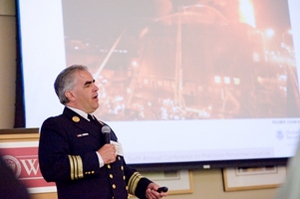 As Orr, Cyganski, and Duckworth worked closely with the fire community, it became clear that the challenge of developing technological solutions for the fire service was an enormous one that could benefit from the cooperation and collective thinking of a broad group of constituents. In 2006 they organized the first in a series of annual workshops that bring together academic and corporate researchers, government agencies, and first responders to share ideas and new research developments, assess the state of the field, and outline future challenges. The workshops, funded in recent years by the DHS Science and Technology Directorate, have played an instrumental role in accelerating the pace of technological development and raising awareness, nationally, of the pressing need to focus resources and energy on finding solutions to the challenges and hazards that first responders face every day.

The workshops are unique in offering technology developers, including WPI, the chance to have their emerging solutions evaluated by actual firefighters, who use the technology in simulated search and rescue operations and similar exercises. The evaluations have provided a remarkable opportunity for system developers to learn about the real-world conditions and environments in which firefighters work. They have also provided workshop participants a front-row seat to the progress that has been made each year in indoor location and tracking technology. In 2012 DHS allowed its own solution, a system called GLANSER (Geospatial Location Accountability and Navigation System for Emergency Responders), to undergo its first real-world test at the WPI workshop, with encouraging results.

The Worcester Fire Department, under the leadership of Chief Gerald Dio and Deputy Chief John Sullivan, has made its personnel, equipment, and vehicles available each year for these tests and Chief Sullivan has been an active participant in the workshops and an enthusiastic supporter of WPI's research program. Firefighters from Worcester and other communities have also lent their time and knowledge to help with WPI's research whenever they have been asked, and they have actively followed the progress of this work. Their dedication and commitment to their lifesaving work, their spirit of camaraderie and collegiality, and their anxious hopes that research programs like WPI's could make their hazardous jobs safer and more effective have inspired the WPI researchers, several of whom have put aside other research pursuits to focus almost exclusively on the technological needs of the fire service.