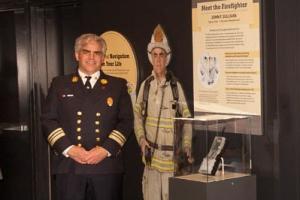 On Dec. 9, 1999, as he watched a procession of thousands of firefighters from around the nation who had come to mourn six of their Worcester brothers who'd died in a tragic warehouse fire, John Orr, professor and head of the Department of Electrical and Computer Engineering at WPI, wondered why there was no technology available to locate and track first responders as they worked inside buildings. Indoor location technology might have enabled the Worcester Six to be guided to safety or rescued after they became lost in the mazelike building.

Orr's commitment to find a technological solution inspired two of his electrical and computer engineering colleagues, Professor David Cyganski and Associate Professor James Duckworth, who have devoted more than a decade to tackling what would turn out to be a monumentally difficult engineering challenge. A product of that research, a prototype indoor location system, will be featured in Time and Navigation, a new exhibit opening on April 12 at the Smithsonian Institution's National Air and Space Museum on the national mall in Washington, D.C.

A receiver unit for the WPI Precision Personnel Location system similar to the one that is on display at the Smithsonian Air & Space Museum.

Time and Navigation: The Untold Story of Getting from Here to There was produced jointly by the National Air and Space Museum and the National Museum of American History and occupies gallery space in the Air and Space Museum. Starting from the premise that accurate navigation requires accurate clocks, the exhibit examines the cultural and technological history of precise timekeeping and navigation at sea, in the air, and in space, as well as with the impact of navigation on our everyday lives. It features 150 objects, including the first sea-going marine chronometer made in the United States, the submarine navigation system for the USS Alabama, a TRANSIT navigation satellite, and Wiley Post's airplane, the Winnie Mae.

Indoor navigation is explored in the section titled "Navigation for Everyone." Precise indoor navigation is difficult because walls, floors, and ceilings cut indoor spaces off from the signals of GPS satellites, which make outdoor navigation available to everyone; they also act as mirrors that reflect radio waves, creating a confusing mishmash of true and reflected signals. With its Precision Personnel Location (PPL) system, the WPI research team mitigated the so-called "multipath" problem by combining advanced radio frequency and inertial navigation technology with sophisticated computer algorithms.

WPI's Precision Personnel Location system included transmitters worn by firefighters, receivers outside the building to pick up their signals, and a display at the incident command station.

The PPL system can pinpoint the location of a firefighter, in three dimensions, and record the firefighter's path through a structure. The location and tracks for all the first responders working in a building are displayed in a simple, intuitive interface on a computer at the incident commander's station, enabling the commander to guide a first responder to a safe exit, if needed, or to direct a rescue team quickly and efficiently to a downed firefighter, so everyone can get out long before their precious air supplies are exhausted.

WPI's technology has been developed in close collaboration with first responders, particularly the staff of the Worcester, Mass., Fire Department. Chief Gerald Dio and Deputy Chief John Sullivan have made the department's personnel, equipment, and vehicles available for tests of the WPI technology and for demonstrations of a number of other location systems during an annual international workshop on indoor location for first responders that WPI inaugurated in 2006 and which it has hosted every year since under the leadership of Duckworth and Cyganski.

The workshops bring together academic and corporate researchers, government agencies, and first responders to share ideas and new research developments, assess the state of the field, and outline future challenges. Funded in recent years by the Department of Homeland Security Science and Technology Directorate, they have played an instrumental role in accelerating the pace of technological development and raising awareness, nationally, of the pressing need to focus resources and energy on finding solutions to the challenges and hazards that first responders face.

Chief Sullivan, who has been an active participant in the workshops and an enthusiastic supporter of WPI's research program, is represented in the Smithsonian Time and Navigation exhibit. A full-size photo of Sullivan stands near the WPI technology as a reminder of the men and women who risk their lives every day across the nation to protect people and property when fire strikes, and of the vital human need addressed by the PPL research program.

A Worcester firefighter wears WPI's pulse oximeter during a test of the precision personnel location system.

As Professor Orr observed on that winter day in 1999, first responders had little in the way of advanced technology at the time to help them do their dangerous jobs. Thanks to research teams like WPI's, that has been changing. For example, from interactions with firefighters the WPI researchers learned that stress-related heart attacks are the leading cause of firefighter fatalities. They decided to add to their location system technology for monitoring a firefighter's vital signs, work that was funded by a major award from the Department of Homeland Security. Among the technology they tested is a wireless, wearable pulse oximeter developed by Duckworth and Yitzhak Mendelson, associate professor of biomedical engineering.

In 2009, with an award from the Federal Emergency Management Agency (FEMA), Cyganski and Duckworth, along with a research team from WPI's renowned Fire Protection Engineering Department, led by professor and department head Kathy Notarianni, set out to develop technology to address another threat that firefighters face: flashover, the moment when all combustible materials in a room simultaneously erupt in flames. A yearlong research and development effort, culminating in burn tests at the Massachusetts Firefighting Academy, produced a sensor that can accurately predict the onset of flashover up to a minute before it occurs.

Currently, Cyganski, Duckworth, and Notarianni are working on a new project, also funded by FEMA, that will produce a sensor that can detect the toxic gases carbon monoxide and hydrogen cyanide in and adjacent to the fire ground. The research responds to the growing realization that these odorless toxins, which are generated by burning materials, can pose significant immediate and long-term health threats to members of the fire service.