When retired Drexel University humanities professor Bernard Brenner died in 2004, a letter of condolence arrived in his daughter’s mailbox in Mohnton, Pa. The sender's name was unfamiliar to Rebecca Brenner. But it wouldn’t be for long.

Behind the sentiments was one of her father’s former students, Diran Apelian, now the Alcoa-Howmet Professor of Mechanical Engineering and founding director of the Metal Processing Institute at WPI. As an undergrad at Drexel, Apelian had taken a sculpture course from the man he credits with opening his eyes and his heart to the world of art. 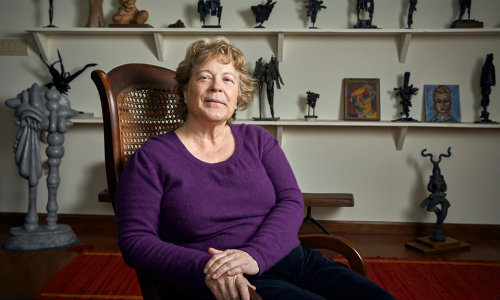 “Bernie encouraged me to pursue my sense of aesthetics and style,” he says. “His words and encouragement changed my world and provided an enriched dimension of life.”

Soon the daughter and the protégé would strike up a friendship. But Apelian’s note, which was as much thanks as it was consolation, would amount to something far greater. In 2008 Brenner, after a discussion with Apelian, and with his assistance, gifted 73 of her father’s sculptures—most of them welded, forged steel and cast bronze—to WPI. The works can be found across campus, the largest display forming the Brenner Sculpture Collection at Gordon Library.

“They just gratefully received the pieces and established the permanent collection,” Brenner says.

“I’m the remaining member of my family, and I don’t have children of my own,” Brenner says. “I’ve been driven by the need to leave the Bernard Brenner mark someplace.”

Her father, she says, was driven by a compulsion to create at his Arcola, Pa., home, which included a foundry: “Any artist will tell you they 'just have to do' their art. He taught so that he would have income to support the family, but he was always working in his studio and he was totally absorbed in that work. It’s a great part of his persona.”

Many of WPI’s Bernard Brenner sculptures were forged between the late 1950s and the mid-1990s, his daughter says. “They are abstract, although strongly figurative,” she adds. “He was fascinated by mythology, warriors, and other cultures. He loved experimenting with many different kinds of media, but it was always the steel and the bronze that he would come back to.”

In a 1973 Drexel publication, Bernard Brenner was asked to identify his favorite piece.

“He said his favorite is 'the next one,' always the next one,” she says. “That says something about the compulsion of always being on a quest.”

Brenner frequently opened his studio to students and members of the public who wanted to explore their own artistic sensibilities. At Drexel, he won the Best Teaching Award on multiple occasions, something Apelian highlighted in his letter. His daughter remembers his tutelage as well, including his showing her how to pour molten metal into hardened plaster molds. “That (the pouring of bronze) was always a fascinating and magical time,” she recalls.

Bernard Brenner bartered for services in exchange for sculptures. His daughter's orthodontia, for example, was paid for with artwork. "He was prolific," she says, estimating the number of pieces he completed in his lifetime to be “in the four figures.” She donated slides of a wide body of her father’s work to WPI, “in the event that someone wants to research my dad.”

The gifts—the sculptures and the endowments—are an appropriate way to honor her father’s legacy, Brenner says.

Apelian agrees. “Bernie loved metals, he loved the processing of metals, and he gave metals a life of their own,” he says. “His impact will be with us forever.”

If you would like to reach Ms. Brenner about acquiring a Brenner sculpture and making a contribution to the Brenner MPI Endowment or the Brenner Scholarship funds, please contact Lynne Feraco, director of planned giving, at lferaco@wpi.edu or 508-831-6675.