Regenerative braking may power the next electric bike 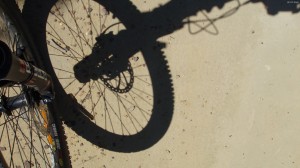 But come spring, that relic could be transformed into the prototype of an electric motorbike with a braking system that returns energy to the vehicle’s batteries, extending the bike’s range of travel.

The project is the brainchild of Matt Chase, Micah Flock, Kevin Antalek, and Tony Cangello, all electrical or mechanical engineering students who took on the ebike for their Major Qualifying Project. Recently, they gave a 45-minute design presentation to Alexander Emanuel, professor of electrical and computer engineering, and Ken Stafford, associate professor of mechanical engineering, who held their feet to the fire by asking questions, making suggestions, and raising concerns, especially about safety, during both testing and operation.

After that and a second presentation to another group, the students met to discuss the comments and incorporate changes in their project.

They came up with the MQP idea themselves. Of the number of motorbikes on the market, a small percentage are electric and an even smaller percentage have regenerative braking that returns energy to the batteries, according to Chase. Of bikes manufactured with regenerative braking, most are aimed at the European market. The WPI students hope to learn the feasibility of developing a vehicle for urban areas in the U.S., one that’s more efficient, safe, and user-friendly, Chase says.

Their bike will use a battery-powered motor that both propels the vehicle and returns energy created during braking to the batteries. The students expect the bike to reach 25 miles per hour and have a range of at least 15 miles, not counting regeneration, which would extend the range by 10 percent, on average. The vehicle would be compatible with electric charging stations like those at WPI and in many major cities. Typical users would be college students and city commuters.

The bike frame – a Sears 10-speed – was obtained free from Earn a Bike, a Worcester nonprofit that teaches people bicycle maintenance and gives volunteers the opportunity to earn a bike from among those donated to the organization. Chase says the acquisition of the bike fit with the students’ plan to get as many components as possible from local sources.

The frame will be outfitted with a 130-volt motor, 10 batteries, a drive train, and operator controls, among other parts, for a total cost of several hundred dollars. Chase said the MQP group would be seeking funding, possibly from WPI or General Electric and other makers of charging stations.

From here, the students will refine their design, order components, decide how to configure the batteries on the frame, build the prototype bike and test it.

Chase says the group is excited about the project, and views it as more than just an academic exercise. “All of us enjoy looking forward to making an electric motorbike.”