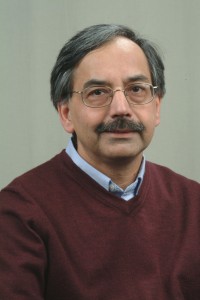 Chemical engineering professor Ravindra Datta has been awarded a $40,000 grant for further study of a new biomass-to-energy process that uses molten salts to get improved results.

Datta’s project is one of five selected by the Massachusetts Clean Energy Center (MassCEC) and Massachusetts Technology Transfer Center (MTTC) to receive a grant.

Biomass-to-energy is a chemical process in which organic or plant matter is converted to a liquid or gaseous fuel that may be used for a variety of purposes. A common example is bioethanol, which is fermented from corn or other starch crops.

But fermentation is just one approach, and it typically requires high-value feedstock such as corn or sugar. Biomass matter such as wood, conversely, must first be deconstructed into simpler molecules, then reconstructed into liquid fuel. In nature, Datta explains, this can take eons. In the lab, it is often replicated by subjecting the material to harsh conditions such as rapid heating to extreme temperatures in a process known as pyrolysis. The procedure can also be accomplished in water under high pressure and temperature, or through the use of acidic solvents such as molten salts.

“Molten salts provide a novel reactive medium or solvent for this,” says Datta. “These are appropriate combinations of salts, including common salt, which at specific compositions form low-melting solvents that are teeming with ions and therefore very reactive, and seem very suitable for dissolving and deconstructing biomass.”

He adds that the use of molten salts is nothing new; researchers have been working with them for years as solvents and as electrolytes. Datta began working with molten salts to produce biofuels about five years ago when he was co-advising MQPs with chemistry professor James Dittami. Since then, chemical engineering professor Michael Timko has joined them.

The fuels yielded from this project, Datta says, will have uses in automobiles, home energy needs, and as a feedstock for chemicals―many of the same applications for which petroleum is currently relied upon. He sees this new technology as a way of continuing to meet growing energy needs while looking out for the environment.

“All energy on earth comes from the sun, and is captured in biomass: plant and organic matter found on earth and in the sea. We have been living off fossilized biomass, such as petroleum and coal, stored over eons. This has released the stored carbon into the atmosphere rapidly over the past century with potentially dire consequences. Therefore, it is necessary to do this in a sustainable manner so that CO2 levels remain constant,” Datta explains.

The grant he is receiving is awarded through the MassCEC Catalyst Program, which is funded by MassCEC and managed by MTTC. According to the MassCEC website, the program awards early-stage researchers up to $40,000 to help demonstrate the commercial viability of their clean energy technology. Recipients must use funding for projects that move their technologies toward commercialization. The goal is to help advance these technologies to a point at which additional commercialization funding can be obtained.

Datta believes the recognition also says much about WPI. “I think it is appropriate for an innovative, hands-on, technological institution such as WPI to be at the forefront of this.” Biomass-to-energy is part of a wide range of renewable-energy research efforts he has been involved with over the years as a faculty member. Other projects include working on a more environmentally friendly replacement for a gasoline octane enhancer (ETBE), and a process that converts beer into ethylene.

“These are now commercial processes. Most of my research over the past decade has, in fact, been focused on fuel cells that convert fuels into electricity in a clean and efficient manner,” he says.