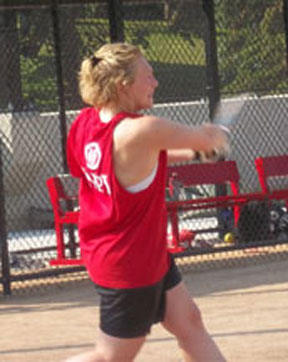 Battling 100-degree temperatures and a fierce sun, the Kuwadas held on to beat the Gompeis 9-5 in a faculty-staff-student softball game played yesterday afternoon on the new rooftop fields of WPI.

The Kuwadas, donning gray jerseys, took an early lead behind the quick bat of Marketing’s Tim O’Neil ’14, who enjoyed 4 hits on the day. An RBI fly by Humanities professor Jim Cocola, (who memorialized the occasion with an insightful reading of “At the Ball Game” by William Carlos Williams), put the Kuwadas out in front to stay.

The Gompeis, sporting dashing crimson jerseys, struck early with a quick run of their own, but were then held scoreless for five consecutive innings by the sneaky, underhand pitching of Advancement’s Scott Hadley, whose off-speed mush ball kept the Gompeis frustrated.

In the 5th, Greg Cesar from CPE seemingly put the game away for the Kuwadas with an inside-the-park home run that brought the crowd to their feet and sent his manager scurrying for an oxygen tank.  Andy Baron from Public Relations followed Cesar’s bomb with one of his own, and the rout was on.

Greg Cesar’s inside-the-park HR brought the crowd to their feet.

Pitcher Mike Hamilton, who gave up both home runs, went to the emory board shortly thereafter and worked his way out of the inning.

Trailing 9-1 going into the bottom of the 9th, the Gompeis made a rousing comeback as leadoff hitter Lindsay Hassett from Alumni Relations sent a rocket down the 3rd base line. After summoning mythical “angels,” SAS president Joey Botelho ’14 followed Hassett’s rocket with one of his own. Bryan “Brick” Rickard (Alumni Relations) knocked in Hassett with a single to center, setting up a showdown with Hamilton.

Still smarting from the two homers he gave up in the previous frame, and his team trailing 9-2, Hamilton strolled to the plate slowly, giving Hadley a menacing glare.  Taking out his frustrations on the first strike he saw, Hamilton hit a monster shot into the Higgins House parking lot to clear the bases. 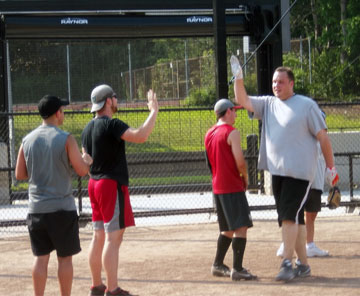 Big Mike Hamilton is greeted by Gompei teammates
after hitting a crushing HR over the right field wall.

Coach Whitney Goldstein quickly came to the mound to settle down her pitcher, and Hadley, not one to ignore  advice from an All-American, retired the next 3 batters to end the contest.

“This was fun.  We should do this again,” said the Annual Fund’s Ashley Hubacz, who reportedly made an Annual Fund ask of every player who rounded third base, getting FY14 off to a good start. Meanwhile, Alumni Relations and Kuwadas left fielder Maureen Maynard was busy saving lives by generously handing out strawberry ice pops to suffering heat victims, including this humble reporter.

Photographer Joan Killough-Miller (WPI Journal) memorialized the historic game in pictures, as the two teams lined up side-by-side for photos and autographs. Pluck and persiflage characterized the spirit of the game, and laughter played a key role in the contest.  Afterwards, many players talked openly about regular on-going games, a rematch was mentioned, then everyone gave props and field cred to organizers Mike Hamilton (Res Services), Dave Ortendahl (CDC), Meredith Merchant (Athletics) and Scott Hadley(Advancement) for creating such a winning afternoon.

–Spanky Spaulding for the Daily Herd 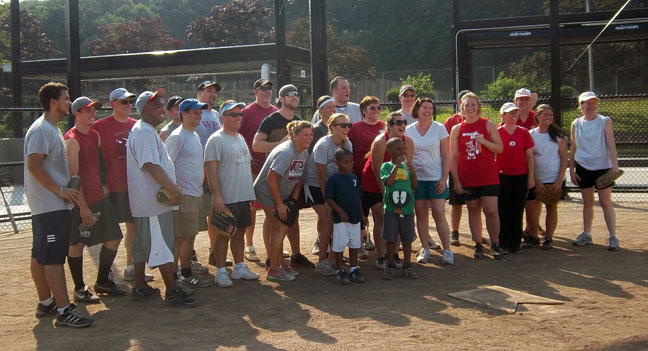 Kuwadas and Gompeis lined up side-by-side for photos and autographs.